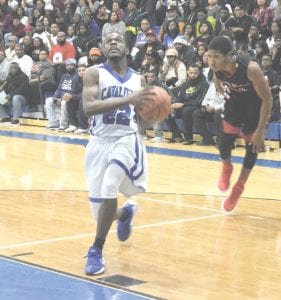 The Cavs’ O’mari Duncan drives to the hole in last Tuesday’s win over Grand Blanc.

The Cavs defeated Renaissance 61-57 on Saturday at Cass Tech in the Tip-Off Classic.

Carman-Ainsworth led 32-22 at halftime, thanks to a second quarter where they held Renaissance to a mere six points. The Phoenix bounced back after the break, outscoring Carman-Ainsworth 21-12 in the third quarter. Still, the Cavs outscored Renaissance 17-14 in the final frame to hold on to the win.

“(It was a) tough game to come back with after the loss to Clarkston (on Thursday) and being our third game of the week,” said Cavs coach Jay Witham. “Started out okay, but after the half we came out flat. Somehow, we managed to will a win, (but) definitely not our best basketball. We need to get better on the defensive end. We are giving up way too many points.”

On Thursday, the Cavs experienced their first loss of the season, falling to defending state champion Clarkston 72-67.

Carman-Ainsworth nearly pulled the upset, leading 47-40 entering the fourth quarter, but the Wolves exploded for 32 points in the final frame, including 13 from Mr. Basketball candidate and Michigan State commit Foster Loyer, who finished with 32 points on the evening.

“(It’s a) tough loss,” said Witham. “(We were) up in the fourth quarter, but three consecutive trips down the floor with either bad shots or poor decisions ultimately cost us the game. Besides that stint, the boys played very well and passionate.”

The scoring load was divided fairly evenly among Carman-Ainsworth, with three players scoring at least 15 points. Duncan was the Cavs’ leading scorer with 20 points, including four 3-pointers. Michael Fletcher was behind him, scoring 17 and was 6-for-6 from the free-throw line. Lewis added 15 points, and Conway added nine.

The Cavs opened their season with a 79-73 win over Grand Blanc last Tuesday. No stats were reported.