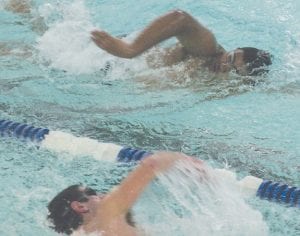 Swimmers pass one another as they make the turn during a relay race.

MACOMB COUNTY — The competition is going to be heated when the Carman- Ainsworth/Flushing varsity boys’ swim and dive team takes the pool at Macomb-L’Anse Creuse North regional No. 2-1 on March 6, mainly because the field is 29- teams deep.

While the Cavaliers at least have the good fortune of entering this challenge with a rather healthy roster thanks to their co-op status, three other squads in this pack can also claim that same advantage, making the presence of thirdranked Bloomfield Hills Brother Rice that much more daunting. As the number six team in the state according to the Michigan Interscholastic Swim Coaches Association as of Feb. 16, Troy is another school that could emerge from this pack standing tall, but the presence of honorable mention teams like Lake Orion, Saginaw-Heritage and Clarkston can’t be overlooked, either.

If Carman-Ainsworth/Flushing is going to make enough waves to support an appearance at the state meet on March 9-10 at Eastern Michigan University one name that might make its way to the forefront is Evan Snyder. He won the 200 free in 2:04.74 and the 500 free in 5:38.49 in a 97-77 victory over Big Nine rival Davison at Flint Kearsley on Feb. 9. As for the shorter races, after placing first in the 50 free in 23.47 and the 100 breaststroke in 1:08.48 in a 100- 80 home victory against Royal Oak on Feb. 2, Pat Sharp could also become something of a force for the Cavs in the postseason, a quality the team hopes to find in divers Brian Mendoza and Chris Michael, as well.

In preparation for the season-ending league meet hosted by Davison at Flint Kearsley today Carman-Ainsworth hosted Flint Powers last Thursday as Snyder and Jake Ziaya finished first and third in the 200 free with times of 2:02.21 and 2:07.34, respectively.