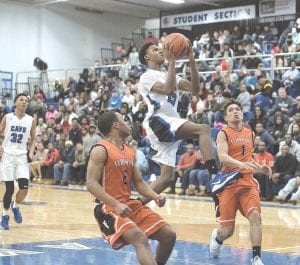 Carman-Ainsworth’s Jayden Nunn drives to the hoop against Flushing in the district semifinal on March 7.

MT. PLEASANT — The Carman-Ainsworth boys’ basketball team played Traverse City West in the Class A regional championship after press deadlines on Wednesday night. The regional champion will advance to the quarterfinals next Tuesday at Grand Blanc High School at 7 p.m.

The Cavaliers blew out Davison 72-48 in the regional semifinals on Monday night. A backand forth opening quarter gave the Cardinals a 13-12 lead, but Carman-Ainsworth went on a 23-10 run to close out the half.

The Cavs’ momentum carried through the break and into the third quarter, outscoring Davison 22-12 and taking a 57-35 lead into the final frame. Carman-Ainsworth kept the Cardinals at an arm’s length for the rest of the game, winning the fourth quarter 15-13 and securing the victory.

The Cavs shot 57 percent from the field, while holding Davison to only 49 percent from the floor. Davison buried six three-pointers, while Carman-Ainsworth only hit two. The Cavaliers also won the rebounding battle 26-14.

The Bobcats took a 17-16 lead after the first quarter, but the Cavs jumped out to a 35-31 lead by halftime. Grand Blanc outscored Carman-Ainsworth 11-10 in the third quarter and 18-15 in the fourth, tying the game 60-60 and forcing an extra period. The Cavaliers won the overtime 8-6, securing the district title.

The Cavs shot 51 percent from the field but were bested by Grand Blanc’s 55 percent shooting. Carman-Ainsworth also outrebounded the Bobcats 34-20.

Duncan led all scorers with 29 points, while also adding six rebounds, two assists and a steal. Fletcher had a monster night with 27 points, 13 rebounds and two steals. Lewis added 11 points, four assists, three rebounds and four steals. Ballard was the only other Cavalier to score, finishing with one point, seven rebounds and an assist.

Carman-Ainsworth advanced to the title game after defeating Flushing 68-41 in the district semifinals last Wednesday.

The Cavs quickly took a 13-5 lead in the first quarter and went on to outscore the Raiders in each subsequent quarter, dominating from start to finish.