Braden “Buddy” Miller of Flushing passes away from brain cancer 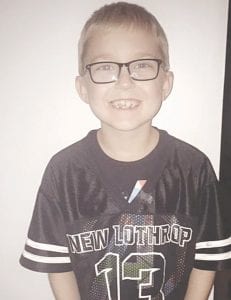 FLUSHING — Braden “Buddy” Miller has died after fighting a long and courageous battle with a rare form of brain cancer.

According to a social media post from Buddy’s family, the nine-year-old Flushing boy passed away early Friday morning. He had been in hospice care for several days.

In January 2017, Buddy was diagnosed with an inoperable brain tumor called DIPG. Because there is no approved care for DIPG in the United States, his parents took him to a hospital in Monterrey, Mexico that offered experimental treatment.

Altogether, the Millers traveled across the border 10 times— with each round of treatment for Buddy costing the family between $17,000 and $30,000 out-of-pocket.

That’s when the Flushing and New Lothrop communities rallied around the Millers to help cover the staggering cost of Buddy’s treatments. Close friends and family helped to organize Team Buddy fundraisers across the region, raising hundreds of thousands of dollars with golf outings, auctions and activity nights at local restaurants.

On May 17, Buddy’s family and supporters traveled to the state capital to celebrate National DIPG Awareness Day and meet with lawmakers to advocate for approval of DIPG treatment in the U.S.

Genesee County Clerk John Gleason, who is a close friend of the Miller family, said he remembers Buddy for his magnetic personality and pleasant spirit.

“He didn’t have a long life, but he inspired a whole community,” Gleason said. “His family will break down future barriers for allowing kids like Buddy to get the care they deserve.”

Friends and family also remember Buddy for his great sense of humor and love for playing football.

Buddy’s father Brad Miller released this statement on Facebook to commemorate his son’s life and thank the community for their support:

“At 12:37 a.m. our precious, amazing son, Buddy received his miracle from God, he has been HEALED. He has been freed from DIPG. He showed his love for us, time and time again, and in his last days he was no different. He loved us all so much and knew we were not ready the day we were told he would transition. So, he gave us all 4 more days together to accept and heal as a family. He also wanted to give me the gift of being here for my Birthday, and so he waited 37 minutes after midnight and he made his journey on his own day. He transitioned with all of us gathered around him and he knew we were all at peace, so he went home to be with the Lord and we all know that monster in his head is finally gone and He is running with the angels.

We thank you for the love, prayers, kind words and for being #teambuddyforever.”

Buddy’s funeral was held on Wednesday at the Swartz Funeral Home in Grand Blanc.