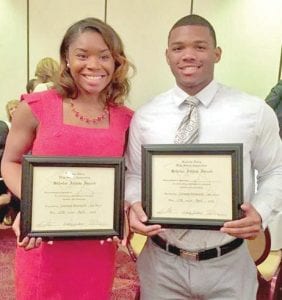 FLINT TWP. – Randi Richardson and Jalen Lewis, both seniors, were named Saginaw Valley League – Carman- Ainsworth Scholar Athletes of the Year for 2015-2016: Randi and Jalen were among 28 student-athletes honored for academic and athletic ability on Wednesday April 27 at the Saginaw Valley League Scholar- Athlete Banquet at Horizons Conference Center in Saginaw. A basketball and track standout, Randi also has a 3.996 grade point average. Jalen distinguished himself on the football and track fields while holding it down in the classroom with a 3.89 gpa. – Provided photo