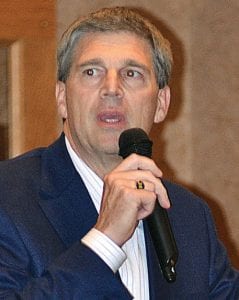 While the rain may have put a damper on things early on, once the event worked its way inside the focus was on moving forward and advancing the Wolverines athletic program on every level, from funding to the school’s new lacrosse programs and everything in between.

“There are a lot of things happening at Michigan Athletics. As it relates to football, we’ve got an easy opener this season that we’re looking forward to,” Brandon joked. “This is the largest guarantee that ESPN has ever paid to put two teams together in the regular season. Jerry Jones informed me that the ticket situation for this Michigan/Alabama football game (on Sept. 1 at Cowboys Stadium) is the toughest ticket in the history of his new stadium, and they’ve had a Super Bowl. Clearly, ESPN expects a huge viewing audience. It’s going to be a big event. It gives our team that extra motivation as they’re working all summer long. They know they’re going to play the defending national champs on the big stage in prime time and I think it’s going to be a great opportunity for our program, and so do all our coaches and kids.”

The only thing missing from this equation was Michigan head football coach Brady Hoke, who had been slated to appear at this event, but was unable to do so because of prior commitments.

“I talked to Brady mid-day. We really tried to get him up here, and he wanted to be here. He knows this is an important group,” said Brandon. “The reality is today is the first day of his camp. He’s got several hundred high school football players on campus.

They had the same problem with the weather. We can’t fit that many hundreds indoors, and it was a tough day and they’re going late into the evening to get around it. As you can appreciate, it’s part of his job to connect with these young people that come to the camp, so he wanted to pass along his regrets that he couldn’t be here. We’ll get him up here as soon as we can.”

Beilein, on the other hand, has been at this event four or five times in his six-year tenure atop the Michigan men’s basketball program. Add to that the Big Ten title the Wolverines claimed last season and the focus quickly switched back to what lies ahead.

“We are excited about basketball. Winning the conference championship was such a thrill for us, and the way it played out was remarkable. We talked about it all season long. We changed where we used to end every practice with the NCAA, it was the last thing. Now it’s Big Ten champs. That’s the ultimate goal at the end of the year,” Beilein said. “Then to do it when you got to get through Penn State and beat them in the 29th game of the year before going home to watch Ohio State beat Michigan State to win the championship. It was incredible to see the reaction of our players. It was like hitting a half-court shot. Winning the Big Ten championship is exactly what we set out to do and it happened, but if you like this, the best is yet to come. There are some great things happening here.”

As for the Wolverines athletic program as a whole, currently Brandon is seeking regents approval for a $100 million renovation and expansion of Schembechler Hall, the building that holds the Michigan football team’s offices, locker rooms and other team facilities, along with a Michigan football museum. This is in addition to the upgrades made to other athletic buildings on the Michigan campus including Yost Arena and Crisler Arena, as well as the facilites not yet in place for the school’s new men’s and women’s lacrosse program, making the cause behind this fundraiser that much more personal given the loyalties involved.

“It’s great for us to come up. Great buffet. Great golf. We feel you. I know I speak on behalf of all our coaches, we feel the passion everywhere we go,” Beilein said. “Dave (Brandon) and I, Brady, Red (Berenson) and many of our other coaches have been all over the country, literally, speaking with our fans, and it’s remarkable. It was a place I always wanted to coach. They don’t like it very much when you lose at Michigan. We all know that. It is where guys like myself, Brady and Red, that’s what we want. It’s tremendous for us to have these opportunities to thank you. We understand that our drive down and back, sometimes there is construction or we lost a game, but you keep coming back and buying the tickets and giving the money.”