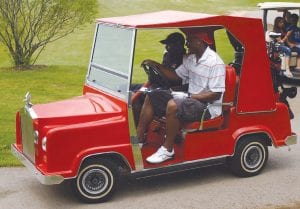 All the funds raised at the golf outing will be donated to the Carman-Ainsworth high school football program. The cost of the outing is $85 per golfer and $340 per team. The cost includes 18- holes of golf, a cart, lunch at the turn, reception dinner, picture with Carr and guests and awards and prizes.

Registration is from 7:30-8:45 p.m. with a shotgun start at 9 a.m. Carr will be joined at the outing by Cincinnati Bengals linebacker and fullback Dan Skuta, Washington Redskins defensive end Chris Wilson and Saginaw Spirit player Mike McFadden. Skuta also was a graduate of Carman-Ainsworth and Grand Valley State, while Wilson attended Flint Northern before heading to Northwood University. McFadden attended Grand Valley with Carr and Skuta.

Carr, a Carman-Ainsworth and Grand Valley State University graduate, is currently playing in the National Football League for the Kansas City Chiefs. The former fifth-round pick has started every game since he was drafted in 2008 and has a total of 192 tackles in three seasons. Carr has four career interceptions, six fumble recoveries, one forced fumble and 50 passes defended.

The slated 7-on-7 football camp has been canceled due to lack of participation.

Any teams wishing to register for the golf outing may still do so by contacting Tawana Branch at 810-210- 6929 or asportsmom@comcast.net. The deadline to register is June 20.