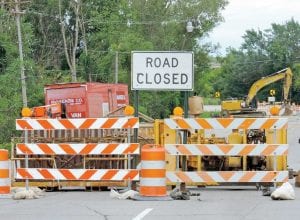 Ballenger Highway south of Miller will be closed until at least late November while the bridge over the Swartz Creek is being replaced.

FLINT TWP. — Making a U-turn was required last week for uninformed drivers accustomed to traveling the southernmost portion of South Ballenger Highway where it connects to West 12th Street in Flint, bordering the Flint Assembly Plant and other General Motors’ facilities on Van Slyke Road.

Due to a total bridge replacement, the road was closed on Tuesday, August 25, and is not scheduled to reopen until about November 20, said Fred Peivandi, director, county highway engineer for the Genesee County Road Commission.

Road closed signs are posted at the corner of Miller Road and Ballenger Highway but drivers who persist find their path totally blocked at the bridge over the Swartz Creek between Flint and Flint Township. The road is open for access to the Unitarian Universalist Congregation of Flint Church and to the Flint Community Players Theater just north of the bridge. Motorists must approach from the south on Ballenger Highway to reach business south of the bridge. 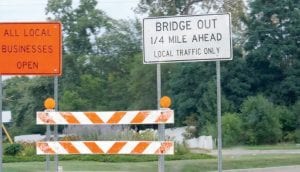 About 13,350 vehicles a day travel that stretch of roadway, which is a low-end count for a multilane roadway, Peivandi said.

The posted bridge is old and rated in poor condition, he said. Plans to replace it this year began about 3-4 years ago. It was originally built as a two-lane bridge in 1928 and reconstructed and widened to four lanes in 1967, Peivandi said.

Traffic is being detoured via Hammerberg Road and Miller Road. I-75 south to Bristol Road or I-75 north to Miller Road are also alternate routes.