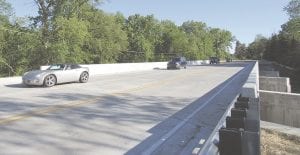 A line of vehicles crosses the new $1.8 million Mill Road Bridge between Beecher Road and Flushing Road in Flint Township Monday. The bridge, which had been closed for 18 months, reopened May 31. Work on the 225-foot bridge was to have been completed last year, but construction was halted when union workers were locked out during a contract dispute. The bridge was closed in November 2017 after inspectors found its deck and support beams were not safe.