Brighton runs away with regional title 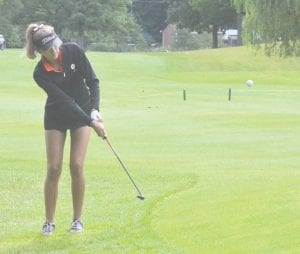 Grand Blanc’s Cameryn Cass chips onto the green during the Lapeer Tune-Up on August 18.

BRIGHTON – Area girls’ golf teams competed in their respective regional tournaments last Thursday for a shot at competing in the state tournament. The top-three teams as well as the top-three individuals not on a qualifying team would advance.

Carman-Ainsworth elected to not compete in a regional tournament this year, but had they competed, they most likely would have been placed in the Region 6 tournament held at Oak Pointe Country Club in Brighton.

State-ranked Brighton ran away with the tournament, finishing with a 309. Hartland took second with a 339, Grand Blanc was third with a 353, Lapeer fourth with a 366 and Grand Ledge fifth with a 367. Davison finished sixth with a 380, Holt was seventh with a 392 and Saginaw Heritage was eighth with a 408.

Lapeer’s Brooke Gibbons was the top individual not on a qualifying team, reaching the state tournament as an individual with a round of 81. Grand Ledge’s Kaylee Hirschman and Holt’s Nateda Her will join Gibbons after both carding a pair of 84s.