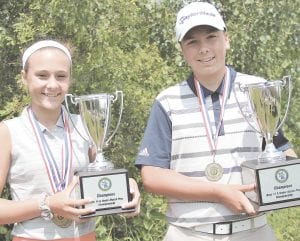 EAST LANSING – Kate Brody of Grand Blanc and Ieuan Jones of Ann Arbor returned as runners-up from a year ago and left champions this time.

Brody said she was looking forward to returning and attempting to win after being second a year ago.

“I really wanted to get a win since it is my last year in this tournament,” she said. “It’s been a really fun tournament. I really like match play. There is a lot of great competition here so it means a lot to win.”

In her final match with Kehoe she won three consecutive holes highlighted by approach shots to one-foot on both hole No. 3 and 4.

“I started to get excited,” she said. “I lost to (Mckenna) in the semifinals of the (Michigan Junior) Girls State Amateur earlier this summer so I knew it was going to take my best golf. It feels good to get the win.”

It was the second GAM win of the summer for Brody, who also won the GAM Junior Kickoff Tournament in the spring.

“I feel like I have gotten so much better than last year,” she said. “I’ve been practicing a lot and working on my swing. All of my hard work is paying off.”

Jones turned back Drew Miller of East Lansing 3 and 2 in the nine-hole final match of the boys’ competition, and Brody topped Mckenna Kehoe of Strathroy 3 and 2 in the girls’ final match. Winners were also crowned in other flights. Complete results are at gam.org under the Championships tab.