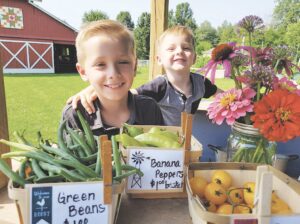 Wesley Schaibly, 7, and little brother Grayson, 4, run The Freckled Hen, a farm stand at the Raymond Family Farm owned by their Nana and Papa, Dawn and Mike Raymond, on Carpenter Road. Photo by Krystal Moralee

RICHFIELD TWP. — Not far from the border between Genesee and Lapeer counties, at 11152 East Carpenter Road, you can find one of the sweetest farm stands around – The Freckled Hen – and its proprietors are equally adorable.

Last year Wesley Schaibly, 7, of Davison and little brother Grayson, 4, took some candy from their Papa, Mike Raymond, and scrounged up some wood on the property, made a sign, and sat by the road trying to sell their goods. They only made around six dollars, but it sparked an idea in Dawn Raymond’s mind, and Nana and Papa got to work. Dawn showed Mike a picture of a farm stand made from an old truck and said she would like to do the same for the boys.

“It started out as an adventure where I showed him a picture, and he said if you can find one, I’ll think about it,” said Dawn.

She found a truck bed from a 1950 Chevy C10 for sale in Imlay City, and they bought it and turned it into a little stand on the property of their 147-year-old farm on Carpenter Road. Then it was time to choose a name, and after going through a number of ideas, they settled on The Freckled Hen. 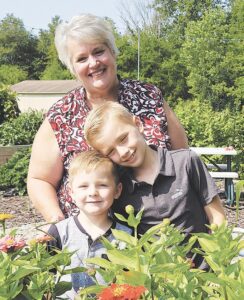 Dawn Raymond and her grandsons Wesley and Grayson Schaibly are responsible for stocking the farm stand with goods from the farm. Photo by Krystal Moralee

“We decided on it because we, as a family, started with chickens,” said Dawn.

The Raymond family lived in a subdivision before moving to the farm 12 years ago. They weren’t really supposed to have chickens where they were, and it was a “lifelong dream” to own a farm, so they finally bought one. The property is peaceful and beautiful, and the Raymonds are the fifth family to own it. They have cattle, a horse, lambs, a potbelly pig, hens, and Thanksgiving turkeys on the farm, as well as beautiful gardens.

“We’re going to get pigs next year because we want to show pigs at the fair,” said Dawn. “We just wanted a simpler life, but it’s not really. We feed ourselves and put up our own food. Can it all and raise our own meat.”

This is the first year for The Freckled Hen, which is open on Saturdays from 10 a.m. to 1 p.m. They serve pies, bread, other baked goods and jams that Dawn makes, fresh eggs from the hens, and vegetables and flowers from the garden. 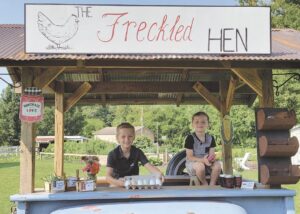 The Freckled Hen farm stand was created around the bed of a 1950 Chevy C10 truck for a unique and attractive vintage look.

“That kind of stuff, the boys have helped plant and grow, and they get some of the proceeds,” said Dawn. “The baking is all me. Sometimes I think their little fingers shouldn’t be in it.”

Wesley is the math whiz, and he handles the sales at the stand. He is also quite the little salesman, Dawn said, and the customers eat it up, some of them staying for quite a while after making their purchases.

“He’s totally our money person,” said Dawn. “He does it all in his head. It’s quite amazing. I don’t worry. People are honest, and if they’re not, it’s a great experience for him.”

“My favorite part is seeing the people smile,” he said.