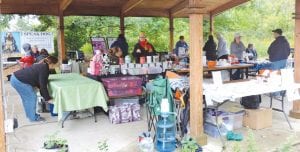 Dog lovers and vendors, some coming from as far away as Lansing, pitched windbreaker tents and braved Saturday’s early morning damp and chill to support the Bark for Life cancer fundraising event held at the Flint Township Park and pavilion on Norko Drive.

Several dog owners braved early morning temperatures in the low 50s to participate in the Bark for Life dog walk at the Flint Township Park. One couple drove all the way from Lansing to support the American Cancer Society fundraising event, said organizer Diane LaBree, of the Flushing Swartz Creek Relay for Life Team. She added that they plan to host another event next spring, hopefully in warmer weather.

Several vendors set up shop in the park pavilion, some pitching tents to keep the wind out. Informative purple and white signs about cancer prevention were posted along the park trails.

A couple of miles down the road, the Flint Township Parks and Recreation Advisory group canceled plans to clean up a beautification area at I-75 and Corunna Road because it was too wet and cold. Organizers say the cleanup will be rescheduled soon and volunteers still are needed.

Rainy, chilly weather on Friday kept the crowds down and vendors bundled up in sweaters and jackets for the first annual garage sale and fundraiser held in the parking lot at the Carman-Ainsworth Senior Center.

Cooler, wet weather also curbed participation at the annual Bikes on the Bricks police escorted motorcycle ride that departed mid-morning from Vehicle City Harley Davidson on Austins Parkway. An estimated 200 bikes took part this year, according to Flint Township Police Chief George Sippert. Upwards of 700 bikers have joined the ride in warmer years past. Sippert said the lower turnout shortened the wait time at intersections on the ride route blocked off by police to allow the bikes to pass through without interruption.

Lousy weekend weather also did not help the turnout on Friday when the Carman-Ainsworth Senior Citizens Center hosted its first garage sale in the parking lot. Coats and jackets were the order of the day as vendors braved the cold and occasional sprinkles of rain. The event was organized to give seniors a safe venue to sell unwanted items without facing risks associated with holding a garage sale at home, according to interim center director Pam Luna.