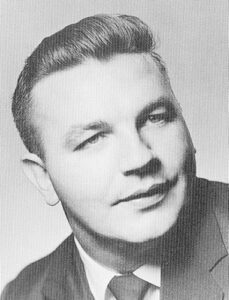 BRUCE LYLE MILLER, 90, of Burton, MI, died at McLaren – Flint on Sunday, October 10, 2021. Cremation has taken place. A private inurnment will be held at Great Lakes National Cemetery in Holly, MI on a later date. Memorial contributions may be made to any animal humane society or food kitchen of your choice, in Bruce’s name.

Bruce was born on a farm near Washington, Illinois on June 18, 1931, son of the late Marion Maynard and Olive Verbinea (Johnston) Miller. He was a graduate of Technical High School in Indianapolis, Indiana and was employed for RCA in Indianapolis. Bruce proudly served his country in the U.S. Navy for four years, from 1951-1955, during the Korean War as a First Class Petty Officer on anti-submarine detection destroyers and at the Argentia Naval Base. He married the love of his life, Mary Margaret Hine, on June 23, 1955, in Indianapolis and then entered Purdue University where he obtained his BS with Distinction and MS degrees.

Bruce commenced his teaching career at Mott Community College in 1960 in the Electronics Technology Department. From 1966-1970, he was an Electrical Engineering Professor for the U.S. National Science Foundation, assisting in creating electronic technology programs and teaching at polytechnical colleges throughout India in Summer Institutes. Bruce was a Past Chairman of the Michigan North Eastern Section of The Institute of Electrical and Electronic Engineers (IEEE) Association, a lifetime member of the Disabled American Veterans, a licensed FCC Commercial Engineer and honored in “Who’s Who in American College Educators”. He retired in 1987 as Emeritus Professor from Mott Community College.

Bruce’s lifetime avocation was sailing, spending many years on all the Great Lakes and waterways on his sailboat. In 1987, he entered the world of ocean sailing with his wife, Mary, on their sailboat. Bruce and Mary spent many years living aboard their sailboat in European and Atlantic Island coastal waters, the Atlantic Ocean and the Mediterranean and Caribbean Seas. In 1992, on the 500th year discovery of America, Bruce followed the sailing log of Columbus, from Spain, missing his discovery point in the Bahamian Islands by 400 miles due to storms. Bruce loved to study the mysteries of science and the beauty of it all.

Bruce was a lifelong, devoted Christian who believed in the goodness of his fellow man and in the purity of Jesus Christ and His messages and promises.