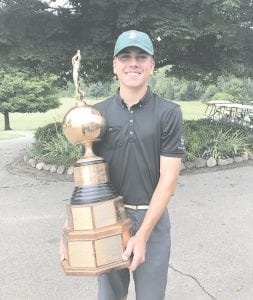 SWARTZ CREEK – The final day of the Flint Junior Golf Association’s (FJGA) match play tournament at Swartz Creek Golf Course wrapped up last Wednesday, as Grand Blanc’s Nick Bruett and Goodrich’s Morgan Swett came out on top of their respective divisions to win the championship flights of the Jack Nicklaus group. The tournament marked the end of the FJGA’s 2018 season.

In the boys’ championship flight, Bruett finished 1-up over Goodrich’s Trent Barth in a rematch of last season’s tournament final to secure the win after both golfers were tied after 17 holes. Bruett finished his round with a chip-in off the green for birdie, while Barth two-putted for par to end the tournament. The win marked Bruett’s third victory of the season after winning the FJGA’s Mancour Cup and Braun Cup earlier this summer. 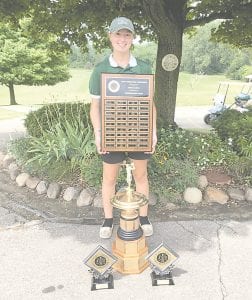 Morgan Swett of Goodrich poses with her trophies Wednesday after being named the 2018 FJGA champion.

The girls’ championship flight saw Morgan Swett defeat Davison’s Isabel Mabry 5 & 4. Mabry noted she played exceptionally well during her final round, but was unable to keep up with the play of Swett, who was a Div. 3 All-State selection last season and will be playing for Northern Michigan University this fall.

In the girls’ first flight, Madison Brigance of Grand Blanc defeated Kearsley’s Emma Bishoff 4 & 3. Goodrich’s Madeline Swett finished 1-up after 19 holes over Alexandra Sexton of Flint Powers in the second flight and Chloe Evoy finished 1-up on Emily Wilson for the third flight victory. 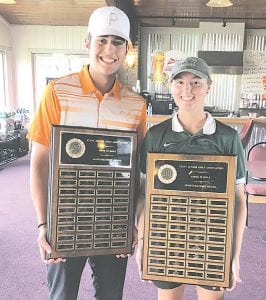 Both Brendan Silpoch of Grand Blanc and Morgan Swett of Goodrich were given the FJGA’s Sportsmanship of the Year awards Wednesday.

In addition to naming the 2018 boys’ and girls’ champions, the FJGA also gave out its Sportsmanship of the Year honors, which were given to Grand Blanc’s Brendan Silpoch and Goodrich’s Morgan Swett.