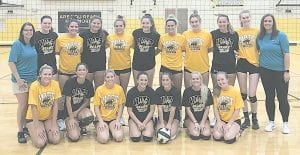 Fans were not disappointed as the match went to five games with the Gold team coming away with the trophy after dropping the first two games, but taking the final three. The fifth and deciding game was a barn-burner, 27-25.

Macy Lintz of Davison was named MVP of the Gold Team and teammate Maria Vukaj for the Black.