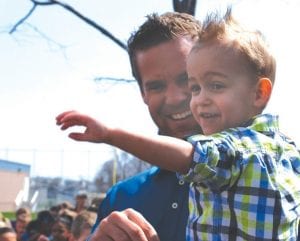 Easton Clark is held by his dad as he tries to pop a bubble.

GRAND BLANC — Raising money in a tough economy is hard, but Lindsay Clark and her husband, Matthew, say they are going to continue to do what they have to in order to “give back” to the hospital that saved their son’s life.

Easton, who just turned 2, was born with Persistent Pulmonary Hypertension (Neo-natal) (PPHN), and at birth was unable to start breathing on his own.

“He was on the ventilator for the first 15 days,” Clark said. “It was very touch and go and we weren’t sure that he would survive.”

Now it’s a family matter raising money to give back to the Neonatal Intensive Care Unit (NICU) at Hurley Medical Center in their annual crusade to raise money for equipment that will help babies like Easton survive.

The Clarks’ also have a daughter Paige, who is 3, and Carter, a young lad in kindergarten at Brendal Elementary.

With the initiative of Clark and the support of Carter’s teacher, Kerri Prue and Librarian, Erin Martin; Carter and the Brendel Student Council organized an event called Bubbles for Babies. The weeklong fundraiser featured bubble themed days and a minimum donation of 25 cents — enabling even the youngest to get involved.

The bubble theme was inspired by one of the items the family is trying to raise enough money for — a baby transporter — which is an oxygen providing device that resembles a bubble.

For a 25 cent donation, student council members sold blow pops and bubble gum. They also had balloons to pop for a prize. Staff members were able to wear jeans for a small donation. They concluded the week with a school wide bubble bash in the back courtyard which featured a brief visit by Easton himself.

Just this portion of funds raised for the NICU was more than $837, and in a few short years, Easton Clark will be a Bulldog too. According to Clark, their first annual fundraiser in 2011, raised more than $27,000 and this year more than $32,000 at a special dinner and dance event held at the Warwick Hills Golf Club.

Although he is well now, the Clarks have to be careful with Easton’s health as he has a depressed immunity, especially to respiratory diseases. Occupational and physical therapy have helped him reach normal childhood milestones, but he is small for his age.

“We just decided (to raise the money) because we were so grateful,” Clark said. “We watched them save him daily, and thought, “There has to be something we can do.”