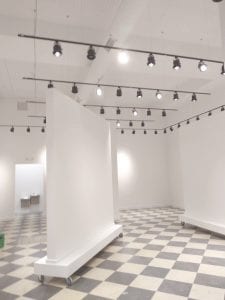 FLINT — When the Buckham Gallery first opened in 1984, its founders weren’t sure it would be open more than a year.

Lynn Penning, gallery director, said the new Buckham Gallery will hold its grand opening to coincide with Flint’s Art Walk, Jan. 11 from 6-9 p.m. There will also be a closing party at the original gallery, with the final closing event at 9 p.m.

The main reason for the move, Penning said, is the difficult flight of stairs leading up to the second floor of the building at 134 ½ W. Second St. The steep, narrow 24 steps have been a difficult climb for visitors and artists over the years.

“The new gallery will be completely ADA (Americans with Disabilities Act) compliant with two handicap accessible bathrooms,” said Penning. “We’re very happy with it. It will be more user-friendly.”

The move is thanks to the C.S. Mott Foundation and Uptown Reinvestment, who are redeveloping the 600 S. Saginaw St. location and offered to include the gallery there at no cost to the non-profit.

“As they started to develop the building, they came up with the idea,” she said. “We will share space with Elga Credit Union and the Total Man (Clothier and Groomer).”

Besides have new space with better lighting, acoustics and a vintage marble floors from the original building in 1934, the new gallery also will have windows where people can look inside from the sidewalk, giving Buckham Gallery better visibility than its had in the past.

The opening exhibit at the new gallery will include an Art Walk Opening Reception of “Chapter 2: The Premiere Exhibition.” Later, at the 9 p.m. closing party, a selection of the gallery’s archives will be open to the public as well as photographs from past exhibits over the gallery’s

Penning said the timing of the move is good because of all the redevelopment going on in downtown Flint.

When the gallery was founded back in 1984, it came at a time when the local art community decided Flint needed a space for contemporary art. The first meetings to form the gallery were held in February of 1984 and the gallery became a reality in March of that year.

Over the years the gallery has hosted local and national artists, including Allen Ginsberg, the poet, and artist Dennis Oppenheim. Details of those visits will be included in the archives available at the Closing Party.