Bucks blast back into playoff picture 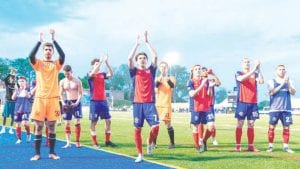 FCB and the Cincinnati Dutch Lions are battling for the second and final playoff spot in the Great Lakes division. Cincinnati sits at 5-3-3 (in division) for 18 points, with one road game left at West Virginia next Saturday. The Bucks are 5-3-2 with 17 points and will finish the regular season with back-to-back games against Dayton the road Wednesday and home on Saturday, July 13. FCB will clinch a playoff berth with a pair of wins. Dayton also maintains playoff hope but would need to win both games versus the Bucks next week.

In Saturday’s victory over West Virginia, the Bucks dominated from the opening whistle but were unable to find the net. Yuri Farkus (Brazil/Madonna) had three shots on goal saved and another shot off the crossbar in the first 39 minutes of play. In the 40th minute, Farkus finally found the back of the net, rounding West Virgina’s goalie and giving FCB a 1-0 lead. He was assisted by Louis Sala (West Bloomfield, MI/NIU).

The Bucks continued to pressure West Virginia, scoring three goals in a 10-minute span. Kevin Buca (Rochester, MI/Michigan) scored with his left foot off an assist from Hammi Nassar (Dearborn, MI/Butler) in the 57th minute. Javier Steinwascher (Sterling Heights, MI/ UI-Indy) made it 3-0 in the 63rd minute after Buca made a steal and found Farkus, who in turn found Steinwascher for the score. Four minutes later, Farkus gave the Bucks a 4-0 lead. Second-half sub Ayuk Tambe (Blaine, MN/Tusculum) did the hard work to create a chance in the final third before pushing the ball to David Achaerandio (Spain/Charleston), who played the ball across to Farkus.

The Bucks closed out the scoring in the 90th minute following a West Virginia free kick when Tambe scored from 10 yards out following a beautiful cross by Sala for the fifth and final goal of the game.

Bucks head coach Demir Muftari looks forward to the challenge in the week ahead, where his team needs two more wins to secure the team’s playoff spot.

“We knew this season was going to come down to the final week, as it always does,” said Muftari. “Every team in this division is a quality side with the ability to win on any given night. We had a couple of hiccups early in the season that cost us points, so now we are in a position where we must win out. Dayton still have everything to play for as well, so we may see the most difficult side we have played all season on Wednesday night in Ohio. If we can get out of Dayton with three points, then we get to come home next Saturday with everything on the line in front of our home fans.