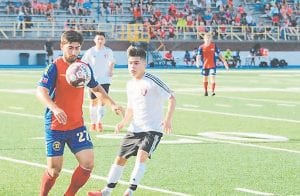 CINCINNATI – The Flint City Bucks soccer team lost to the Cincinnati Dutch Lions 3-1 on Sunday. Both teams went scoreless in the first half before the Dutch Lions scored three straight goals to start the final frame.

Alexander Greive scored Cincinnati’s opening goal at the 55:00 mark of the second. Reece Hands provided the assist. Jorge Guinovart was assisted by Connor Probert at 68:00, making it 2-0. Probert scored the Dutch Lion’s final goal unassisted at 83:00.

Last Thursday, the Bucks and Chicago FC United completed their four-game regular season schedule defeating FC United 2-1 at home. The win gave the Bucks a three-games-to-one advantage over Chicago in the season series.

The Bucks and United both started young squads for this match, as both clubs are dealing with the challenges of a long summer season, player injuries and MLS training camp visits for first team players. The first half was a bit tentative for two teams that know each other very well. While most of the first half was played in the middle third of the pitch, the Bucks did manage a few dangerous opportunities in the opening 20 minutes before they finally opened the scoring.

Alec Philippe (Milwaukee/ Wright State University) sent in a picture-perfect cross from 40-yards out that landed on the head of Bucks local midfielder Spencer Nolff (Grand Blanc/ Oakland University), who calmly headed the ball into the back of the net for a 1-0 lead.

In the 35th minute, Bucks speedy forward Leroy Enzugusi (Des Moines/ Drake University) took a long ball over the shoulder and headed in on goal alone with Chicago keeper Freddy Lorenzen. Enzugusi beat the keeper to the ball, but Lorenzen made heavy contact with Enzugusi in attempt to knock the ball away. For his efforts, he was issued a yellow card and the Bucks were awarded a penalty kick. Louis Sala (West Bloomfield/ NIU) stepped up and finished the job, giving the Bucks a 2-0 lead.

Chicago had one chance late in the first half when the Bucks turned the ball over deep in their own zone and forward Jonathan Robinson put one past keeper Gustavo Vasconcelos (Brazil/ Marshall), cutting Flint’s lead right to 2-1 before the half.

In the second half, the Bucks controlled possession, outshooting FC United 10-5, but could not score a third goal.

Last Tuesday, the Bucks advanced to the Michigan Milk Cup finals in their first appearance in the statewide tournament with a 2-1 overtime victory over Grand Rapids FC (NPSL) at Atwood Stadium.

The Bucks scored the game winner in the 101st minute (first session of extra time) compliments of Hammam Nassar (Dearborn/ Butler), who blasted home the game winner from the top of the box, following a flurry of Bucks shots that had been saved or blocked by GRFC defenders. Nassar came off the bench and scored the game winner just as he did last Friday in Chicago in his first USL League Two match.

The Bucks dominated most of the match with possession and moved the ball at will but continued to have problems negotiating the final third of the field in the first half. A brief defensive lapse in the first half allowed the visitors to score from close range for an early 1-0 lead.

The Bucks nearly tied the score when a blast from close range beat keeper Joe White but was saved off the line by a GRFC defender- the first of three such saves. Former Buck Caleb Postlewait made two great defensive plays in the second half to bail out his goalkeeper to keep the West Michigan side in the game.

After an early second half save by Bucks goalkeeper Gustavo Vasconcelos (Brazil/ Marshall), the Bucks took control of the game and played the next 20 minutes peppering shots at the Grand Rapids goal. After having three saved off the line and two shots off the crossbar, the home side finally tied the game up in the 70th minute when Alec Philippe (Milwaukee/ Wright State) side volleyed in a goal from close range following a brilliant service by defender David Achaerandio (Spain/ Charleston) to knot the score.

The Bucks continued to pound the Grand Rapids goal but couldn’t get the game winner until the extra time session. The Bucks outshot GRFC 25-9 but forced goalkeeper Smith to only make three saves.

The Bucks played in the Michigan Men’s Milk Cup final against Oakland County FC at Clawson Stadium on Tuesday.