Bucks register back to back wins in West Virginia 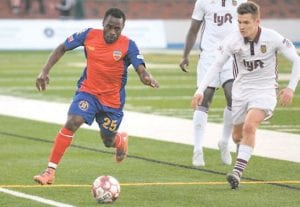 Flint’s Ayuk Tambe was named Man of the Match Saturday after scoring goal and assisting on another. Photo courtesy Flint City Bucks

The Flint City Bucks finished off their most difficult stretch of the USL League Two regular season with two more shutout victories on the road. The two matches against WV Alliance FC were anything but similar, as the Bucks needed a last second goal from Alliance killer, Yuri Farkus on Friday for a 1-0 win and cruised to a 7-0 victory on Saturday night.

In West Virginia, six players earned their first-ever start in USL League Two action, and another three players saw the field for the very first time.

The first match on Friday was a carbon copy of the Bucks-Alliance USL home opening game played at Atwood Stadium on May 18. The Bucks dominated play, but could not find the net, while West Virginia sat back and waited to counterattack to try and steal a goal. West Virginia capitalized on a late Bucks turn over and scored to take a 1-0 lead. Second half sub, Farkus headed home a last second goal to secure the point.

Friday night saw lighting strike twice, as Farkus came off the bench and headed home a Brayden McNitt corner kick at the final whistle. This time it gave the Bucks the victory and the much-needed three points to stay right behind FC Chicago United in the Great Lakes Division standings.

The Bucks hit the halfway point of the 14-game USL League Two schedule with a 7-1-2 record (3-1-2, 11 points in league play), but still stinging from the two season opening ties. Chicago sits ahead of the Bucks at 4-1-0 (12 points), with their only blemish at the hands of the Bucks. The two teams will meet two more times in June to battle for the top spot in the division.

Saturday’s match looked nothing like Friday’s thriller, as the Bucks tweaked the line up and inserted several young attackers into the starting 11 to try and score early and relieve some pressure. The tactic worked, as West Virginia had a difficult time keeping up the pace of Leroy Enzugusi, Will Jackson and Ayuk Tambe, all making their starting debuts for the Bucks this season.

Tambe was named Man of the Match on Saturday with a four-goal, one-assist performance. Enzugusi scored twice in the game on beautiful goals and Jackson added a pair of quality assists.

The Bucks split the goal keeping duties over the weekend with Andrew Pannenberg getting the win on Friday and Gustavo Vasconcelos registering the clean sheet on Saturday.

Bucks head coach Demir Muftari was happy to bring the road warriors home for some much-needed rest over the next two weeks. “We have a very difficult game on Wednesday with Dayton, which is now the most important game of the season. We have struggled with keeping bodies healthy, so the lineup has changed from week to week and night to night. The beauty of this organization is that we are committed to a large pool of players so that when we bring in the next eleven players, we are just as dangerous. To be able to go on the furthest road trip and bring home wins on back-to-back nights is a testament to the commitment of the players here and it is appreciated by the organization and the fans.”