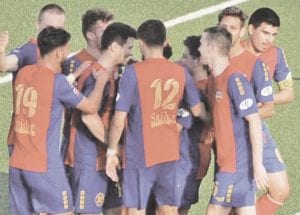 With a 4-2 win over Kaw Valley, the Flint City Bucks advanced to the Western Conference Championship where they will host FC Golden State at 7:30 p.m. on Saturday. Photo provided

In Saturday’s win, Yuri Farkas (Brazil/Madonna) celebrated his 26th birthday with a goal and two assists. He scored in the seventh minute of play when a Kaw Valley defender gave up a ball inside the box. Farkas pounced on the loose ball and gave Flint a 1-0 lead.

In the 15th minute, Justin Ingram (Indianapolis, IN/ Loyola MD) tracked a defender back inside his own eighteen-yard box, stole the ball and fed Farkas at midfield to start Flint’s lethal counterattack. Farkas carried the ball for thirty yards before picking out Ayuk Tambe (Blaine, MN/ Tusculum) on his left, sliding him a pass that Tambe buried. Ayuk cut the ball back to his right and finessed a low shot through two defenders and into the corner of the net, giving the Bucks a 2-0 lead.

In the 24th minute, Kaw Valley made a long run down the left flank and crossed a ball into the box that was missed by two Bucks defenders before being shot past Flint City keeper Andrew Pannenberg (Charlotte, NC/ Wake Forest) to halve the lead. Just a few minutes later Kaw Valley knotted the score at 2-2 on an FCB defensive lapse.

The Bucks came out attacking in the second half when Farkas once again carried the ball to the end line and drew two defenders to him. He slipped the ball back to Javier Steinwasher (Sterling Hts., MI/ UI Indy), who nestled a left-footed shot from twenty yards out into the far corner inside the post for the eventual game winner in the 56th minute.

Farkas would have one final important impact on the match in the 59th minute when he went in alone towards goal and was run over by the Kaw Valley keeper just outside the box. Farkas earned a free kick, but the KV keeper earned a straight red card and the Bucks played a man up for the remainder of the match.

The Bucks managed the rest of the game by controlling the ball and keeping Kaw Valley outside the eighteen-yard box for most of the half. After a couple of KV shots late in the game, Ingram finished a nice two-on-one break after a neat pass from Damani Camara (Columbus, OH) to put the game away at 4-2 in the dying minutes of injury time.

“This was a long four days on the road and two grueling matches so I know the boys are all excited with the win, but we are all thrilled to have earned the right to play the biggest game of our season back at Kettering’s Atwood Stadium in front of our passionate fan base,” said FCB coach Demir Muftari. “We took care of the first two legs of the journey, now we have two more to go to win another national championship. We don’t know much about our next opponent except that they won their division, they won their conference and they score a ton of goals so we will have our work cut out for us. We will be ready for the challenge.”

The Menace went up 1-0 on an end to end counterattack right after Farkas nearly opened the scoring for the Buck in the 30th minute.

The Bucks tied the game in the 45th minute when a Des Moines defender came flying at a Bucks shot inside the penalty area and deflected the ball with an outstretched arm. Farkas stepped up and nailed the spot kick and the teams went into the halftime break even 1-1.

In the second half, the Menace once again took the lead in the 56th minute on a beautifully headed shot off a Des Moines corner kick that left goalkeeper Pannenberg no chance.

The teams battled back and forth for the remainder of the game as Des Moines tried to kill off the game with a 2-1 lead. In stoppage time, Louis Sala (West Bloomfield, MI/ NIU) sent a long fifty-yard ball into the box that Menace goal keeper Jordan Bell could not collect and an opportunistic Tambe was there to smack home the loose ball and send the game to overtime.

In the first overtime, the Bucks had a distinct advantage when a Des Moines player was red carded for fouling and stepping on Ingram. The Bucks could not capitalize, and it was the Menace that converted another counterattack and scored with thirteen minutes left in OT.

Camara, Gustavo, Sala and Ingram all scored penalty kicks to seal the victory for the Bucks.