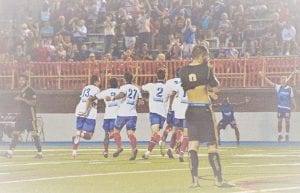 In last Saturday’s semifinal, Flint City and Western Conference champ FC Golden State started the match like a heavyweight bout with both teams possessing the ball and avoiding major mistakes. The Bucks had the better chances in the first half when Farkas and Tanguy Guerineau (France/Oral Roberts) connected several times in the final third but couldn’t sneak anything past Golden State goalkeeper Miguel Marin. The Bucks out-shot their opponent 8-1 in the first half. Andrew Pannenberg (Charlotte,NC/Wake Forest) stumped Golden State’s only shot on goal, as he made a beautiful diving save headed for the lower corner of the net.

The second half was much of the same, with both teams playing as if the next goal might be the only goal of the match. That turned out to be the case when David Achaerandio (Spain/ Charleston) was fouled in the penalty area in the 78th minute. Farkas coolly stepped up and finished the spot kick in what would be the game winner.

The Bucks weathered the storm for the last five minutes of the game and then an additional seven minutes of stoppage time. Elliott Bentley (England/ Oakland University) was the hero in the 87th minute when an FC Golden State laser was headed for goal and saved off the goal line by Elliott’s forehead.

Flint City now heads to the USL League Two final for a record sixth time in the club’s 24 years existence. The Bucks have won the last two championship matches they have hosted in 2014 and 2016.

On Sunday night, League Two Director Chris Madden, who was present for the Buck’s semifinal victory, announced that the championship match would be played at Atwood Stadium.

“The Bucks organization has been one of our top clubs for over two decades, so we were not surprised at the professionalism of the organization in staging a first-class event,” said Madden. “We were very pleased to see a fantastic crowd of nearly 5,000 at the match and the overall support for the team everywhere we visited. You can’t go anywhere in town without seeing or hearing about the Flint City Bucks. What [Bucks president] Costa Papista has done in this first year in Flint and Genesee County is one of the great success stories of our league. It didn’t take our committee long to agree that we needed to showcase our premier match of the year from Kettering’s historic Atwood Stadium.”

The championship match between the Bucks and Reading United FC will kick off at 7:30 p.m. Tickets are available at www.ticketmaster.com or in person at Atwood Stadium. – J.O.