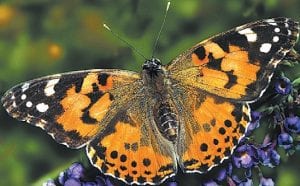 FLINT TWP. — Gary Dunn has about 100,000 bugs at his home and frequently gets more from his mailbox. Most of them are dead.

The East Lansing bug collector showed about 1,000 of his specimens to children gathered Thursday at the Genesee District Library branch for a presentation called “Young Entomologists.”

Using large rubber specimens, Dunn demonstrated the difference between six-legged insects and eight-legged spiders. He challenged the children’s imaginations by donning a funny costume to transform himself in a giant insect with antenna, six legs, and compound eyeballs that see multiple images at once.

Best of all, he displayed about 20 cases of specimens – most of which he collected himself. They were labeled by type or place of origin.

Dunn debunked some misconceptions about bugs popularized by movies and cartoons. For example, bugs are depicted with singular eyes like humans when in fact their sight is made up of “a lot of little eyes,” he said. 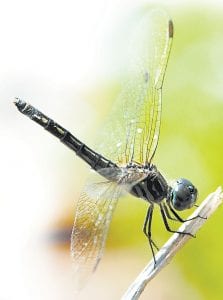 Dunn shared that more than 40,000 insects live in Michigan alone compared to about 100,000 in Florida, about 2 million near the equator and 10- to 30 million on the planet, depending on which scientist you ask. The colder the climate, the fewer the insects, Dunn said.

More of Dunn’s trivia included that the world’s heaviest insect weighs about as much as a tennis ball, about 4 ounces, and the smallest can fly through the eye of a needle. And contrary to popular belief, Black Widow spiders are uncommon in Michigan, Dunn said. They often are mistaken with the common red and black Jumping Spider that is not poisonous to humans, he said.

Devin Robinson, a fourth-grader at Woodland Elementary shared with Dunn that he had been bitten by spiders several times. He said his arm became swollen and had spidery veins running over it but now he “has a better grip’’ with that arm like Spider Man.

Gary Dunn, in his bug outfit, speaks to kids at the Flint Township Public Library.

Gwen Roland of Baton Rouge, La. who was in town visiting with her grandfather Jerome Wolbert of Swartz Creek, said looking at bugs is exciting but she would not want them crawling on her.

Dunn got hooked on bugs as a college student when he took an entomology course because it was the only elective available. He’s traveled the world collecting bugs and also exchanges them by mail with bug pals around the world.

He said he’s raised about 40 live tarantulas and scorpions in his home.

Dunn estimated he’s presented entomology lessons to about 17 million children in the 28 years he’s been making appearances at schools, libraries and other educational venues. He speaks regularly at events in Genesee County.

He also runs the North American Bug Club for kids which includes a subscription to Cyberbugs Minibeast e-magazine for $10 a year. Details: nabugclub@gmail.com.