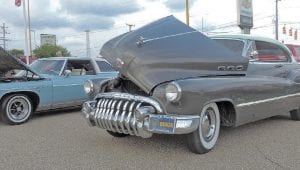 Vintage Buicks parked at the Patsy Lou Williamson lot on Linden Road provided a trip down memory lane, as proud owners showed off their cars.

FLINT TWP. — Frank Grace stood proudly next to his vintage Buick Riviera as he pointed under the hood at a heavy-duty engine that Buick no longer makes. The car was purchased from Patsy Lou Williamson Buick and on Monday afternoon Grace brought it home.

As a member of the Buicktown Chapter of the Buick Club of America, Grace joined 30 other Buick car owners in a first-time cruise from the historic birthplace of General Motors on Water Street near downtown Flint, through the city to the Williamson dealership at Corunna and Linden Roads.

Grace, one of the cruise organizers, said the group hoped to generate some good cheer with its promenade that traveled through business and residential areas along West Court Street to get to Linden Road then south to the dealership lot.

A food concession and DJ provided atmosphere for the Buick aficionados who popped their hoods, set out folding chairs and sat back to enjoy the afternoon and talk about their cars. The lineup ranged from a 1933 Model 57 couple to the iconic Electra 225, aka deuce and a quarter, produced from1959 to 1990.

It was the first of three Buicks on the Bricks activities planned this week by the club.

They planned to do it again today, Thursday, August 18, as part of the official Back to the Bricks festivities this weekend.

At 4 p.m., the club planned to meet up again at Water Street for a cruise to the Hemphill Road Mega site (on the grounds of the former GM Fisher Body plant) where a special section is reserved for Buicks. Participants can enjoy entertainment while watching other BTB cruisers parade up and down Saginaw Street.

The final Club event starts at 6 am. on Saturday, August 20, when the group plans to gather at Water Street for the annual big Car Show. For more information about Buicks on the Bricks, visit online at www.buickclub.org/ calendar/