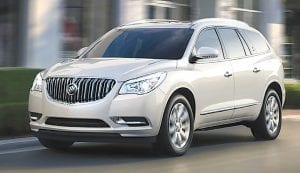 Buick Enclave’s 62,300 sales in the United States in 2014 represented the second consecutive year of record sales for Buick’s flagship crossover and built on momentum that has barely paused since its launch in mid-2007.

While most vehicles follow somewhat of a bell curve for sales during their lifecycle, the Enclave has continued on an upward trajectory after more than seven years.

Minor dips in 2009 and 2012 reflected overall trends in the recovering auto industry, but record-setting 2014 sales represented a 39 percent increase over the Enclave’s first full year of production.

Buick spokeswoman Lauren Indiveri said that these numbers are particularly exciting for Buick because the brand has been undergoing a change over the past half-decade.

“I’d say the term, ‘rebranding,’ is fair to use for Buick,” Indiveri said. “Our ads and our image were a bit of a brand problem and I think we’ve been up front about it.”

But by offering vehicles like the Enclave and the Encore, Buick has been able to change its image with the buying public. The brand was among the earliest to offer a small SUV in the Enclave, Indiveri said. Its sales have been strong over a long period of time.

More than 450,000 Enclave models have been sold world-wide since its launch.

“Few vehicles in any segment of the industry enjoy such a legacy of increasing popularity,” said Duncan Aldred, vice president of Buick. “In fact, many customers are enjoying their second or third Enclave.

“The Buick Enclave was really the perfect vehicle at the perfect time,” said Karl Brauer, senior analyst for Kelley Blue Book. “It instantly expanded the brand’s reach by offering an attractive and functional SUV with luxury amenities.

The Enclave is based on GM’s Lambda platform and is related to the GMC Acadia and the Chevrolet Traverse.