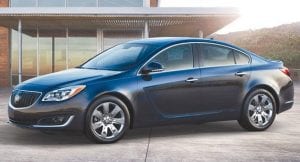 Producing an SAE-rated 259 horsepower and 295 lb.-ft. of torque from just two liters of displacement, the Regal has more standard horsepower and torque than the Acura TSX, Audi A4, Lexus IS 250, Mercedes-Benz CLA 250, Volkswagen CC, and Volvo S60, Bjork said.

The new turbo four-cylinder engine incorporates an improved twin-scroll turbocharger and a host of other advancements that result in a smoother, quieter engine with improved power and efficiency, Bjork said.

What company research is showing, Bjork said, is that people are buying the Regal based on its design, but they also like the performance and horsepower and value it provides. “And Buick’s efforts to be known as a less stodgy brand is paying off.”

Equipped with its six-speed automatic transmission, the 2014 Regal gets an EPAestimated

“We really strived to not only give the customer great performance, but also a smoother, quieter, and more refined engine, all essential elements in a Buick,” said Mike Katerberg, chief powertrain engineer.