Burton couple running in opposite parties for State Rep seat 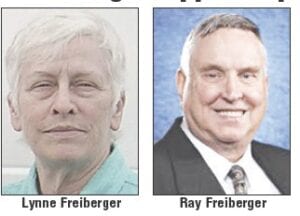 BURTON — Republican Lynne Freiberger, 67, retired businesswoman, entrepreneur, and Vietnam Era Veteran, has tossed her “Woman Veteran” hat into the race for House of Representatives in the 50th District.

Her husband, Ray Freiberger, 71, a decorated disabled Vietnam veteran, retired federal agent, and businessman is running as a Democrat for the same House seat. He will face incumbent Tim Sneller (D-Burton) in the Aug. 4 primary.

Meanwhile, Lynne Freiberger will face Republican opponents Christina Fitchett-Hickson and Lynn Hukee, Aug. 4, the winner of the matchup moving on to the Nov. 3 election.

This means the general election in November could see a race of Freiberger vs. Freiberger.

Lynne said she is running has a lot to do with the current pandemic concerns in the country and across the State of Michigan.

“The current COVID-19 pandemic has brought to light that several Michigan’s legislators cared more about their political careers than the welfare of Michigan’s residents,” she said. “I learned the importance of family values, coming from a working-class family and serving in the military and that the welfare of the people/ comrades-in-arms matter more than any career.”

She said she felt running for Michigan House of Representatives 50th District seat was her responsibility and duty as a resident of the district and Michigan.

After graduating from Highlands High School in North Highlands, Ca. she studied Business Administration at American River Community College. Lynne served 8-plus years in the Army as a Tele-Communication Center Specialist with duty in Panama, Germany and the United States.

While stationed in Germany she met her future husband, Raymond Freiberger. In 1982, she started her 32-plus year career as a businesswoman and entrepreneur.

During this period, she said she had several highly profitable business ventures. Her longest and most profitable venture was a cat supply company which started as a small local retailer and grew in a complex international company.

Lynne said she considers the issues facing the 50th District to be roads/highways, better education and increase programs for new and existing businesses.

When campaigning in 2016 for Burton City Council and again in 2019 for Burton Mayor, she found that these concerns were primary on the minds of the voters.

Since moving to Burton in 2015, Lynne said she has been compelled to give back to the community. She has participated in the AARP tax preparation program, and several events with ‘Genesee Serves’, and local animal rescue groups.

“It is my civic duty to put the residents’ needs first,” she said.

Lynne said she understands simple and complex budgets, has the ability to solve problems in a timely and effective manner by thinking ‘outside the box’ and has experience in interacting with individuals from all walks of life.”

Raymond Freiberger said he is running for 50th district State Representative because he thinks it is time for government by the common working person and not career politicians.

Raymond was born and raised in Burton and he is a 1967 graduate of Bentley High School. He received a BBA (accounting & taxation) from Eastern Michigan University.

Raymond Freiberger served seven plus years in the Army Intelligence Branch with tours in Vietnam and Germany which required him to learning to several different languages.

While in Vietnam Raymond received the “Bronze Star” and was affected by Agent Orange. In 1981 Freiberger started his 25-year career with the Internal Revenue Service.

During his IRS career, he worked as a revenue agent, group manager, district project coordinator, and writing material for the national office.

After retiring in Texas, Freiberger opened a local and national income tax practice. In 2015 Raymond returned to Burton with his wife. Since returning he has participated in several community activities. They include AARP Tax Preparation, ‘Genesee Serves’ and PAWS animal rescue.

Raymond said he learned the 50th District and Michigan itself have several overwhelming systemic issues which have gone unresolved/ unanswered for years and need to be addressed. These issues facing taxpayers range from keeping food on the table and a roof over their family’s head to what the future will hold for their grandchildren, based in the current environment and unrest.

Coming from a factory workers family, where helping individuals was second nature, Raymond said he understands the importance of putting other individuals needs first. He has selected four major issues he’d like to focus on if elected. They are upgrading the economic and living standard of Michigan’s residents, improve treatment of Michigan veterans, improve Michigan’s infrastructure, and improve Michigan’s education system.