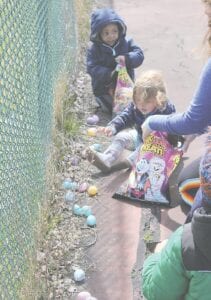 BURTON — The Parks and Recreation Commission voted Feb. 10 in favor of canceling the annual Burton Easter Egg Hunt again this year due to COVID-19 concerns.

The event had been scheduled for March 27 on the grounds of Atherton Jr./Sr. High School, but commissioners said with restrictions of public gatherings still in place, a large event like the Easter Egg Hunt would not be safe to hold.

“We can’t even meet as board through March 30,” said Commissioner Sandra Talbot. “Even though it’s held outside, the numbers are going to be huge. That’s too many people – I say it’s a no go.”

She said Haskins had asked for any volunteers from Parks and Recreation to help out with planning the event.

Commissioner Jim Craig asked what the status of the Memorial Day celebration and race looked like, with COVID- 19 still being a concern.

Clous confirmed the city would ultimately base any decisions about Memorial Day on whatever the directions of the governor’s office are at that time.

Craig said the Memorial Day race remains in a holding pattern, but added he’d like to see a virtual race if the city decides to cancel the in-person race.

On Feb. 15, the city council met, and it was announced the Memorial Day race will be virtual and free of charge to anyone participating. Details on the virtual race will follow in the coming weeks.

Craig indicated the Burton Kiwanis will also hold its annual Hot Fudge Run & Walk as a virtual event this year due to the COVID-19 crisis, the event taking place from Feb. 20-26.

The Hot Fudge Run & Walk is the kickoff of the Burton Race Series, which the Memorial Day race is a part of.

“Many fall races are cancelling now,” said Craig. “If we don’t go forward with a live race, at least we can do virtual.”