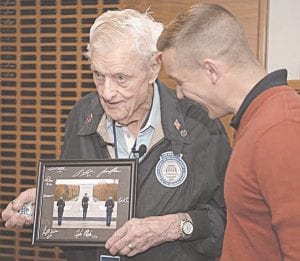 Army Capt. Harold Earls, right, commander of the Tomb Guard, presents World War II veteran Jack Eaton, 100, with a signed photo and challenge coin from the Tomb Guard. The presentation capped Eaton’s visit to the Tomb of the Unknown Soldier at Arlington National Cemetery in Arlington, Va., Oct. 23, 2019. Eaton, a former Army corporal, served as a sentinel at the Tomb of the Unknown Soldier from 1938-1940. Army photograph by Staff Sgt. Vanessa N. Atchley

BURTON — It took three trips to Arlington National Cemetery, but Burton resident Jack Eaton finally has been recognized as the oldest living Sentinel of the Tomb of the Unknown Soldier.

Eaton, a 100-year-old World War II veteran, spent the morning of Oct. 23 at Arlington National Cemetery in Virginia, where he saw for the first time a plaque commemorating his guardianship of the monument from January 1938 to December 1939.

Eaton toured the back barracks of the guards of the Tomb of the Unknown Soldier during a Mid-Michigan Honor Flight trip in 2017. A plaque honoring the soldiers who had guarded the tomb was on display there, but Eaton’s name was nowhere to be found, so he asked about it.

There are few records dating back that far, but an investigation found that Eaton knew details only a sentinel would know, like the small chapel that’s hidden behind the monument. A plaque with Eaton’s name and dates of guardianship was erected, but during a second Mid-Michigan Honor Flight trip in 2018, Eaton was disappointed again when the plaque was displaced. 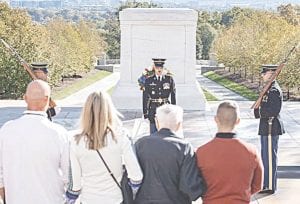 Finally, on his third trip to Arlington, he received his honor and saw his name on the plaque.

“We saw the changing of the guard and had a ceremony at the Pentagon,” Eaton said. “We spent the day doing a lot of talking and walking. It was pretty hectic for a couple of years, but everything turned out good. We got a beautiful trip out of it.”

Eaton grew up in coal country in Brownsville, Pennsylvania, where his father worked on the railroad hauling coal from West Virginia to Pittsburgh. When Eaton was 18 years old, he quit school and enlisted in the Army in 1937.

“I was in algebra class, and I thought, ‘What the hell good is algebra,’” Eaton said. “It was during The Depression, and there wasn’t much going on, so I set the algebra book on top of the desk and quit and went and joined the Army.”

Eaton was stationed at Fort Belvoir, Va., and said he got the job as sentinel because he fired expert with his rifle and was very competitive in his military training and other activities. Standing 6 feet tall, Eaton’s height also helped because sentinels were usually tall. Sentinels are all volunteers and are members of the 3rd U.S. Infantry Regiment, known as “The Old Guard.”

One morning when Eaton was coming off detail was especially memorable.

“We heard a commotion in the morning when they were getting ready to take our detail off,” he said. “We found out the king and queen of England were going to be there. The queen right now was on her early teens and she was with them. I had pictures of them, but they were lost in all the moves we made.”

When Eaton’s enlistment expired in 1940, he went to work at Hudson Motor Car Co., but when the U.S. entered World War II after the bombing of Pearl Harbor, he headed back to Fort Belvoir. His old commander got him a spot in a welding school where he was trained in the use of oxy acetylene and other forms of electric welding. After his training, he was assigned a truck full of welding equipment and mechanical tools and parts and a full-time mechanic.

In 1942 Eton, the mechanic and the truck were shipped to England and moved from one airfield to another to repair heavy equipment like bulldozers, graders and cranes used to build runways. Eventually he was sent to France and Germany.

When the war ended, Eaton went back to Hudson for a time, then opened his own window business with a 2,100-square-foot factory and showroom. Eventually, he owned and leased out 51,000 square feet of industrial space and became so successful he was able to retire at 55.

“I worked hard to do it,” Eaton said. “Nobody ever gave me anything.”

Eaton and his wife, Isabelle, lived in Florida for many years before moving to Davison where Isabelle’s mother lived. During retirement, Eaton enjoyed playing golf, and the couple took trips and spent time with friends and family. They lived in their condo up until a year ago, when Eaton broke his hip and entered Lockwood of Burton. Isabelle suffers from dementia is cared for at another facility. Nowadays, he loves to dance at the happy hours every Friday at Lockwood.

“They play music and bring in entertainment,” Eaton said. “They had an Elvis impersonator who was pretty good. When the music starts, my feet want to move, but I don’t do any slow stuff.”

Eaton’s stepdaughter, Brenda Warburton, and her husband accompanied him on his latest trip. In addition to Arlington, they also visited the Pentagon where Eaton received a flag that had flown over the Capitol, and there was a huge welcome home waiting for him when he arrived back at Detroit Metro Airport. Women dressed as Rosie the Riveter greeted him, and a band played, giving the oldest living Sentinel another chance to dance.