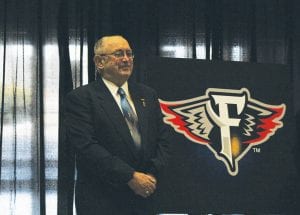 Burton resident Tom Barden stands next to the alternate logo of the Flint Firebirds.

FLINT — When it became clear that Flint was on the verge of getting an Ontario Hockey League team this fall, ownership immediately launched a naming contest, which promised the winner a pair of free season tickets. The winner of the contest turned out to be life-long Burton resident and hockey fan Tom Barden. Barden was one of 38 to submit the name Flint Firebirds, but he won it outright after a random drawing.

“Once I saw that ‘Phoenix’ was out, I thought that ‘Firebirds’ was similar,” said Barden in a news release from the Flint Firebirds. “It still means rising from the ashes.”

Barden, a 67-year old disabled veteran and General Motors retiree, is a long-time supporter of hockey in the Flint-area, including holding season tickets for the Flint Generals as early as the 1970s. His passion didn’t waver over the years, though, as he also held season tickets for the Michigan Warriors, who are now on their way out of Perani Arena.

Barden is excited with this step in the right direction as he has seen quite a bit of change in the community since his first days of buying Generals season tickets.