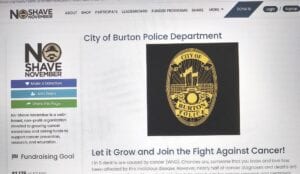 A screenshot of the Burton Police Department No-Shave November page.

BURTON — The Burton Police Department is showing its support for the fight against cancer with a No-Shave November event going on right now.

Burton Police Chief Brian Ross said the department’s involvement in the fundraising effort came about after a conversation with Mayor Duane Haskins.

“We were talking about things we could do for the community,” said Ross. “He came up with the idea of having No-Shave November, he presented the idea to me and we were excited to get involved.”

Ross said each officer paid $50 to participate and residents are encouraged to donate during this time to show support for the bearded officers.

Ross said the idea was well received by the department and the officers created a Team Page on the No-Shave November website.

He said the officers are enjoying the challenge, which goes through the month of November. Ross said he’s also taking part in the event.

Normally clean-shaven, Ross said it’s taken a little effort to get used to wearing a beard.

“I’ve been shaving every day since I was a teenager, with the exception of weekends and long vacations,” said Ross. “This is my first time growing a beard…and it’s a little itchy.”

Some of the other officers taking part in the event are Kevin Kissel, Michael Catlin, Charles Iddins, Nelson Lakey, Mike Mathiak and Andrew Babcock.

To visit the Team Page online and to donate, visit no-shave.org/team/18BPD18?fbclid=IwAR26s9tF76C0nHZ0fT9nSSXlSxM2Ttl1qodlWVbO0yKaBPnFRcGnjdowtyE