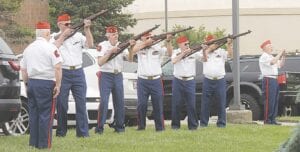 BURTON — A ceremony was held at the Burton Veteran’s Memorial on Monday to recognize veterans who made the ultimate sacrifice serving their country.

The day-long Memorial Day event, which included a race, a parade, car show, air show and fireworks, was also viewed as a reopening celebration for Burton after a year of being locked down due to the COVID-19 pandemic.

At 4 p.m. Monday, the ceremony honoring the city’s veterans was held following the parade down Center Road. It was officiated by 67th District Court Judge Jessica Hammon with several guest speakers and other dignitaries attending.

Mayor Duane Haskins gave the memorial address and thanked the community’s veterans for their service and sacrifice.

“For us to be able to come out today with this celebration for Memorial Day, for veterans who sacrificed everything for our freedoms… it’s exhilarating,” said Haskins. “I want to thank the ones who gave the ultimate sacrifice, the ones who aren’t here today, for this beautiful Memorial Day. We are celebrating all those who allowed us to be here and be free.” 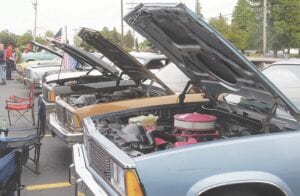 A car show was held in the parking lot of Burton City Hall as part of the Memorial Day festivities.

Also taking the podium during the ceremony was State Rep. Tim Sneller (D-Burton) who said it was an honor and privilege to be there honoring the brave men and women who gave their lives defending the United States.

Sneller took a moment to also recognize Smiley, Centilli and Hines for their efforts to build the Veteran’s Memorial a quarter-century ago.

“The vision that former mayor Charles Smiley and Councilman Centilli had 25 years ago, I recognize the importance of building such a great memorial to remember those brave souls who never made it out of their uniforms,” he said. 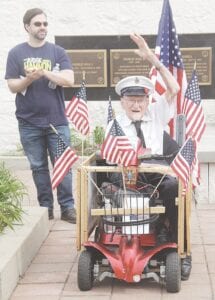 Grover Good, a 100-year-old Burton veteran, was recognized for his service in World War II during the Memorial Day ceremony. Photos by Gary Gould

He then took a moment to talk about recent legislation he introduced to recognize the month of May as Military Veterans Suicide Awareness Month.

“We’re losing so many more here, at home, than we’re losing in the battlefield,” said Martin. “There’s more to service, like the baggage they bring home, they bring home their PTSD and their anxiety. If you are a veteran, or you have family who is a veteran, please call the county department of veteran’s services, get an appointment or a (Veterans Administration) file started.”

William Palmer, head of Genesee County Department of Veterans Services, also spoke to the crowd about the importance of Memorial Day and remembering the sacrifices made by veterans here and around the country. 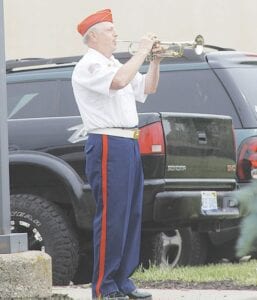 Taps was played during the ceremony, Monday.

He urged people to enjoy the holiday, considered the start of the summer season, but asked they also recognize the true meaning of Memorial Day – the fallen soldiers who died defending the United States, it’s people and its freedoms.

“Do not forget, do not become complacent. Stay the course, not only for yourself, but for your family, neighbor and country,” said Palmer. “By doing so we honor those who gave us that freedom. From the Revolutionary War, the Civil War, World War I, World War II, Korea, Vietnam, the Gulf War and Enduring Freedom. Men and women have defended it to this very day, to their last breath. If you look out on the national cemetery, like the one in Holly, you can look over those silhouettes of white markers all lined up, they are all brothers and sisters, no matter what branch they came from.

“So, take in the peace and tranquility while you’re out there for a minute. Take solace that there are those who still stand guard. Never take for granted what you love,” he said. “Now, go be with your family, friends, have a barbeque, tell the stories. Go to the beach and have a fun time, because that’s what it’s about, it’s about family and to know those who died on that field in some far away land, gave (their lives) out of love.” 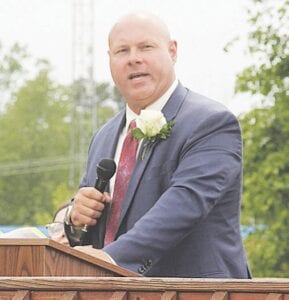 Burton Mayor Duane Haskins addressed the crowd during the event. 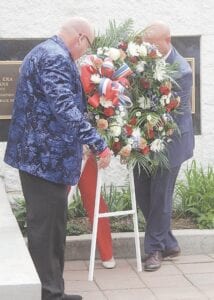