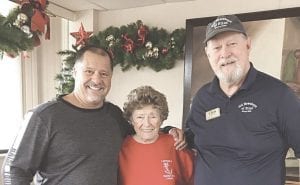 Burtucky Days at the Captain’s Quarters, 6011 E. Atherton Rd., held recently benefits the Old News Boys, North End Soup Kitchen and Flint City Pits. The Old Newsboys of Flint extended their thanks to everyone who came out to Burtucky Days and enjoyed the fun filled four-day event. The proceeds from the $3 arm band charge raised more than $5,000 for their organization. “We would like to thank Greg Benjamin, his family, patrons of Captain’s Quarters, our volunteers and supporters like you,” said Old Newsboys Executive Director Chris Hamilton. “The funds from this event will provide Christmas Boxes to over 250 children in need in Genesee County. Since 1924, the Old Newsboys of Flint have put presents under the tree for over 812,000 children across Genesee County. Last year alone, 6,179 children received gifts from the Old Newsboys. “With this event and the continued support of businesses like Captain’s Quarters and the community, together we are making a difference,” said Hamilton, “one child at a time.” Other organizations benefiting from the event, hosted by owner Greg Benjamin, were the North End Soup Kitchen ($5,000) and the Flint City Pits ($3,200).