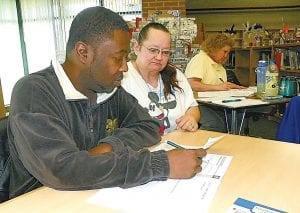 DuJuan Houston, a school bus driver for three years and Tina Allen, a driver for six years, go over exercises in a manual during crisis intervention training.

To help them cope or prevent misbehaving students on school buses, the district’s 60 drivers convened in the middle-school Media Room last week for a professional development workshop.

Basically, they were there to learn to address students in a non-confrontational manner and get them to be more orderly on the bus, said David J. Klinck, C-A Supervisor of Transportation/Facilities and Energy Manager.

A couple of bus incidents in late fall were the impetus for providing this training, said Russ Parks, assistant superintendent, when announcing the training in early December.

The training was led by Deb Aro, the district’s positive behavior support coordinator and Mike Menges, a school social worker.

The bulk of the training focused on causes of behavior and appropriate verbal interventions.

In one exercise, Aro asked the drivers to define the ideal student. After some good-natured joking that no such person exists, they compiled a list of traits that included polite, respectful, positive, helpful, prompt, decisive and quiet.

Then Aro flipped the script and told the drivers they must model those same traits to inspire similar behavior in students.

“I can’t say that enough; you can’t force people to behave appropriately,’’ Aro said. “If we want to change behavior, we first have to look at changing ours.”

Empathic listening, recognizing the stages of an escalating crisis and establishing rapport with students were among strategies covered by the training to help drivers maintain control on the buses.

Aro and Menges also talked about understanding behaviors that stem from outside of school.

Acting out is one of the ways students respond to stress and anxiety that may stem from something in their home environment or outside of school. The rise in social media can also lead to student conflicts that begin online and come to a head as soon as they see each other on the bus, Aro said.

‘This job is tough,’’ Aro said about driving a school bus and the parenting, policing and psychoanalyzing skills that are required for it.

But when all else fails, drivers also need to know how to handle physical violence. The afternoon segment of the training was devoted to self-defense strategies including blocking kicks, releasing a hair pull, a choke hold or a biter.

Tina Allen, a driver for six years, said she picked up several verbal strategies she plans to try.

DuJuan Houston compared driving a school bus for the past three years to driving a city bus ten years. The city route was easier because adult riders are more likely to do what the driver asks them to do, he said. A lot of the training suggestions are just using common sense, he said.

Aro said the training is being done staff wide, not just for bus drivers.