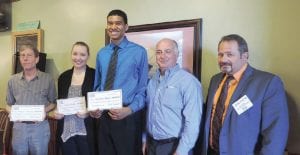 Keith Kirby, president of Curbco (second from right), John Folts, chairman of the WFBA scholarship committee (right) stand with the three winners of this year’s scholarship awards who are (left to right) Gregory Vanucci, Logan Keene and Jonathan Berry.

FLINT TWP. — After working for many years, Gregory J. Vanucci lost his job and had difficulty finding another one because of his age and lack of a degree. He ran out of money and even became homeless before getting his life back on track.

Now a student at Mott Community College, where he is working on a bachelor’s degree in psychology, Vanucci is the epitome of what the WFBA Adult Learner Scholarship is all about.

“He should be an inspiration to all of us, not just because he was homeless but because … Greg is not a person to give up,’’ said John Folts, chairman of the West Flint Business Association scholarship committee, which presented its annual $2,500 scholarship awards last week to Vanucci and two other worthy recipients.

WFBA’s Adult Learner Scholarship recognizes an person who has been out of high school at least three years and is currently working and/or attend college to improve him- or herself.

Vanucci has a 3.925 grade point average, has earned an associate’s degree at MCC and hopes to go on to eventually earn a master’s degree in social work.

Vanucci said winning the award will relieve a lot of his financial burden.

Jonathan is a senior at Flint Powers Catholic High School where he has earned a 4.23 g.p.a. and is ranked eighth in his class, Folts said. He is the captain of the Quiz Bowl team at Powers and was the drum major in the marching band in 2014-15. He also is a member of the National Honor Society and Powers Theater Department. He plans to earn an engineering degree from The Ohio State University then complete a master’s degree program in biomedical engineering. He also hopes to attend medical school.

WFBA bestows its High School Community Service Scholarship on a high school senior planning to pursue higher education, who has demonstrated exceptional achievement and leadership in school and the community. Logan’s award is designed to assist a high school senior who intends to continue education in specialty vocational area at a post-secondary institution. She is a student at Genesee Early College where she has earned a 3.435 g.p.a. and is ranked 13th in her class. She plans to enter the nursing program at the University of Michigan-Flint. Logan has been taking classes at UM-Flint since 11th grade and is already at home on campus.

“Skilled trades and vocation education are dear to my heart,’’ said Keith Kirby, president of Curbco, who helped present the award to Logan. Kirby said he was impressed by all the young people who interviewed for the scholarship. He denounced media portrayals of young people as being unwilling to work hard and other shortcoming. “We all need to promote the wonderful people who are part of this community,’’ Kirby said. “We can see today that we do have some young people who are very committed.”