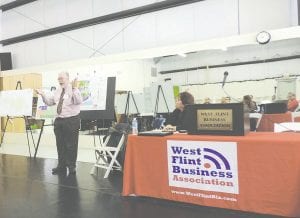 The WFBA hosted a brainstorming session to gather ideas for economic development projects for a proposed Downtown Development Authority and Corridor Improvement Authorities.

FLINT TWP. — How about an outdoor amphitheater in the township to provide a venue for public concerts like those in Clio and Flushing?

How about better access from the freeway to Beecher Road to benefit the medical businesses there?

How about shuttle service, video surveillance, sidewalks, crosswalks and better lighting to improve township safety for residents and visitors.

Those are just a few ideas for township improvement offered during a brainstorming session last week, hosted by the West Flint Business Association.in conjunction with the township Economic Development Corporation. The township is in the process of creating a new Downtown Development Authority and two Corridor Improvement Authorities – one for Bristol Road and one for Beecher Road.

Doug Piggott, a planner for Rowe Professional Services, was on hand to explain the process, answer questions and guide the brainstorming process. He was assisted by Tracey Tucker, township economic enhancement director.

The two were looking for input from business people on what sort of improvement projects they would like to see happen in the township in the next 20 years or so. This brainstorming session was the first of many being planned.

Piggott explained that project ideas must be included in the final application plans for the DDA and CIA’s. Because they are working on a tight schedule, they started the brainstorming part early, Tucker said.

Ultimately, separate boards will be established to oversee the DDA and the CIA and finalize the projects list. The township board also has final say over what goes on the list.

Pigott explained that the plans need to be in place by May in order for 2017 to be used as the base year for capturing tax increment financing (TIF) that would be used to pay for proposed projects.

Tucker noted that a former Central Business Development Authority, similar to the DDA, was responsible for many previous projects in the township including development of Taft, Mansour and Dutcher roads, the service drive on Miller Road and the walkway on Corunna Road.

Pigott explained that both a DDA and CIAs are being formed because a DDA is required to have contiguous boundaries. Rules for CIAs, which are similar development tools, is that the boundaries are within 500 feet of an arterial road, as defined by the federal government. Beecher and Bristol qualified.

Piggott also noted that after the project plan is completed, it can be made smaller but not larger, so it needs to be as comprehensive as possible.

Plan development is currently in a 60-day opt out period to allow affected taxing bodies time to decide to support the program or opt out. That will expire at the end of February.

The next step then would be to establish the boards for the DDA and CIAs, Piggott said. Members will be appointed by the township supervisor with approval from the township board. Those bodies will be responsible for submitting the final projects plan.

More public hearings will be held as part of the process.