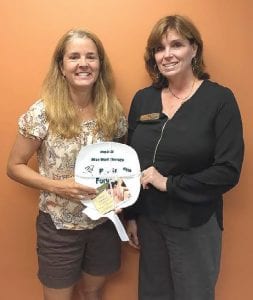 Beth Booher of Holly was named the May winner of the Maxwell Therapy Pay It Forward Program.

FLINT TWP. — Beth Booher was selected as the Pay It Forward Winner for the month of May by Max Well Therapy, 1397 S. Linden Rd.

Max Well Therapy’s Pay it Forward program is designed to recognize individuals in the community who give their time and attention to others. Each month one winner receives a one-hour massage from the skilled therapists on staff to thank them for all that they do.

Booher is a co-teacher of a Young 5’s program at Patterson Elementary in Holly. Her day does not end at 3 p.m. when class is dismissed. Instead, she changes her cap from teacher to coach. She has coached Little League Baseball in Holly for 6 years and sits on the board for the league. Booher has also coached a girl’s indoor and outdoor soccer team for the past two years. When she is not in the classroom or out on the field, she enjoys spending time boating and scrapbooking.

Booher has been a teacher for 18 years. From 1997 to 2004 she taught at Valley School on Linden Road in Swartz Creek. In 2004 she became a stay-at-home mom with her three children. In 2010, she decided to return to teaching. Sine then, she has been in her current position at Patterson Elementary.

Booher, who is happily married, was adamant about making it known that she would not be able to do all she does without the constant support of her husband Matt. She said it is a team effort between the two of them through commitment to their family.

Max Well Therapy is accepting nominations for future Pay It Forward honorees. Mail nominations to Max Well Therapy, 1397 S. Linden Rd. Flint, MI 48532; email to jmaxwell@maxwelltherapy.com; or FAX to (810) 230-8799. Include the name of the nominee and why they deserve to win, your phone number and best time to reach you. — R.S.