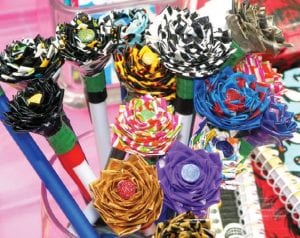 Flower pens made by twins Rebecca and Alyssa Pray of Flushing for their kid’s business at the mall.

FLINT TWP. — McKinley Mihailoff hopes to furnish her house with money earned from her new business.

But she’s only 10 and the furniture is for a dollhouse she got for her birthday. Her business, TBear’s Henna Hut, was one of eight run by children that were featured last week at Genesee Valley Center mall.

All were winners in a Kids, Inc. mall-sponsored contest last month which offered to young entrepreneurs the prize of running a mall store. Participants were allowed to keep the money earned during the one-day event.

McKinley and her sister Kennedy, 15, spent the day, drawing henna tattoos on customers’ hands. Kennedy said she learned to do the intricate hand designs from a friend then taught them to her sister.

Two different kid’s stores showed the wonders of mixing creativity with duct tape which is now sold in many different colors and patterns besides standard gray.

Between the two stores, customers could chose from a broad selection of items made from duct tape including purses, hats, cellphone cases, tote bags made from ziploc bags, flower pens, photo frames, water bottles, bracelets and hair accessories.

Aditi and Neha planned to donate ten percent of their earnings to the American Cancer Society.

She started about a year ago with a kit from an uncle for her birthday. She buys bottle caps from craft stores to make her items but also collects real bottle caps as a hobby.

Tucker. That lets Chloe customize the cap design with whatever a customer wants including school colors and logos, names and images.

Chloe even took a special order from a mall customer who bought flip-flops for her granddaughters and special ordered bottle caps with their names on them.

Madeline Daunt, 11, of Davison showed off her nail design skills at her business Madeline The

Manicurist. She taught herself by watching a video.

Madeline said running her mall business was teaching her patience.

Morning business was a bit slow because a lot of people didn’t have time to get their nails done but things started to pick up after noon, she said.