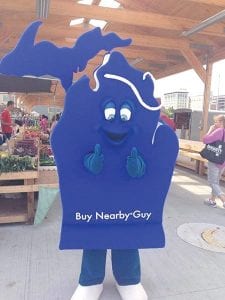 The Buy Nearby Guy attended a press conference last week at the new Flint Farmer’s market, organized by the Flint & Genesee Chamber of Commerce to promote the Michigan Retailer’s Association Buy Nearby statewide campaign.

GENESEE COUNTY — Gaines Jewelry, 3310 Beecher Rd, in Flint Township, was among local business on hand to welcome the Buy Nearby Guy to a press conference last week at the new Flint Farmer’s Market in downtown Flint.

The Buy Nearby Guy is a blue mitten shaped mascot of the Michigan Retailers Association (MRA). The Buy Nearby campaign is an ongoing, yearround, feel-good campaign, launched in 2011, to create excitement about great shopping venues in Michigan and the advantages of supporting retailers and communities in the state. The campaign is designed to get shoppers committed to buying in Michigan, according to an MRA press release.

The campaign runs throughout the year and is celebrated annually on the first Saturday in October as “Get Caught Blue-Handed” Day, which reflects the blue Buy Nearby logo (incorporating the blue of Michigan’s lakes and sky) and is a play on the expression “get caught red-handed.” 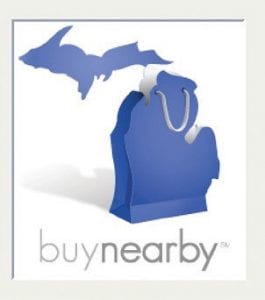 In addition to promoting the fun of shopping at Michigan retail businesses, the Buy Nearby campaign is designed to be an economic driver for the state.

About half of every dollar spent in a Michigan store goes back into the local and Michigan economies. (Source: 2004 Andersonville Study of Retail Economics).

If Michigan consumers chose to support businesses in Michigan by always buying nearby rather than from out-ofstate retailers, Michigan in 2015 would gain more than 74,639 additional jobs and $9 billion in additional economic activity, including $2.5 billion in additional wages the new workers would earn. (Source: Anderson Economic Group, Economic Costs of Untaxed Remote Sales and Potential Benefits of “Buy Nearby,” July 2014).

If Michigan consumers switched only one in 10 of their purchases from out-of-state merchants to Michigan businesses, Michigan still would gain more than $900 million in increased economic activity and 7,463 new jobs. Switching one in five purchases would mean more than $1.8 billion in increased economic activity and nearly 15,000 new jobs. (Source: Anderson Economic Group, Economic Costs of Untaxed Remote Sales and Potential Benefits of “Buy Nearby”).

Shoppers and retailers are encouraged to use social media to post photos and comments on “Get Caught Blue- Handed” Day, on October 4 this year, as well as throughout the year, about their great experiences when they Buy Nearby. — Rhonda Sanders