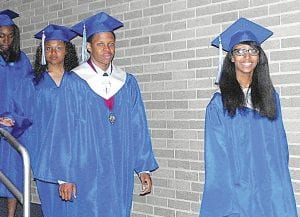 FLINT TWP. — More than $3 million in scholarships including several full-rides were announced at the Carman-Ainsworth High School Honors Program Tuesday night as 150 outstanding seniors from a graduating class of 345 took their bows.

He said he had every confidence the students have been well-prepared to meet the challenges in life head-on. He also congratulated the parents and everyone else who played a role in guiding the students to this milestone.

Superintendent Bill Haley presented the first-ever ACT Excellence Award to 19 students who scored in the Top 10 nationally on the academic test. Haley also presided over presentations of gold honor cords to 27 students who have earned GPAs of 3.80 or higher.

Deborah Davis, assistant principal, acknowledged the 16 students who are candidates for the CA Academic Hall of Fame. The winners will be notified when all supportive criteria is competed later this summer.

Other notable awards included those to Kaylee VanFleet and Tony Wells-Johnson Jr. recognized for never missing a day of school from ninth through twelfth grade. They were among 14 students recognized for one or more years of perfect attendance in high school.

The Tall Pine Council recognized three seniors for attaining the rank of Eagle Scout. They are Timothy Arnold, Kyle McGilvery and Brandon Skwirsk.

Among numerous honors, Erick Skaff, who has served as a student member of the CA Board of Education, received the Board of Education Student Award the Genesee County Association School Board Members Award and the D.A.R. Good Citizenship Award.

In one emotional tribute, Jennie Johnson Pollak presented the Joe Johnson Scholarship in memory of her brother, a CA graduate who was killed last June while serving in Afghanistan. She said the award presented to Kamron Marsh was for exemplifying her brother’s motto to live life to the fullest.

Also Mr. and Mrs. Gary Somers presented the Steven S. Somers Scholarship in memory of their son, a CA student athlete who was struck and killed by a car in 1985 while out jogging.

Athletic director Robert Root announced the names of 33 outstanding athletes being added to the CA Athletic Wall of Fame. Representatives from Baker College of Flint, Kettering University, Mott Community College and the University of Michigan-Flint announced scholarships ranging from $2,000 to full-rides.

Aris Campbell racked up six scholarship offers but plans to accept the Board of Trustees Honors Scholarship at CMU where she will major in elementary education and theater, Carter said.

Sarah Zimmerman, a top honors graduate, landed four college scholarships including one she will accept at MSU where she plans to major in theater.