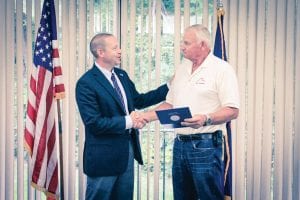 “Emotional” is how Vanderkarr, a Vietnam veteran, described the moment two weeks ago when he was presented his diploma by Carman-Ainsworth Superintendent Steve Tunnicliff.

A member of the Ainsworth class of 1967, Vanderkarr did not graduate with his class. He was drafted into the Army and went on to spend two years in active service and 26 years in the Army Reserve. An Armor Recon Specialist, during his years of service he was awarded the National Defense Service Medal, Vietnam Service Medal, Combat Infantryman Badge, Purple Heart, Army Commendation Medal, Army Commendation Medal with Valor, DVC with Oak Leaf Cluster, Vietnam Campaign Medal w/DVC, Bronze Star Medal with Oak Leaf Cluster, and Silver Star Medal.

But his chance to finally receive his diploma came about earlier this year when Gov. Rick Snyder signed Public Act 55 on March 25, enacting a bill introduced by 33rd district state Senator Judy Emmons. The new legislation, amending P.A. 181 of 2001, allows local school boards to grant high school diplomas to Vietnam veterans who did not graduate.

Vanderkarr visited the Carman- Ainsworth administration building to file his application, which included providing proof of an honorable discharge.

His wife and daughter accompanied him to the diploma presentation on Sept. 12, and were happy to see him get it, he said.

In presenting Vanderkarr his diploma,

Tunnicliff said: “To be certain, this was one of the most memorable diplomas that I will ever grant as a Superintendent…. to see how much it meant to Mr. Vanderkarr to be formally recognized as an Ainsworth graduate was quite humbling.”

Ironically, Vanderkarr said, despite his lack of a diploma, he has served as a board member for Burton Glen Charter Academy for nine years.