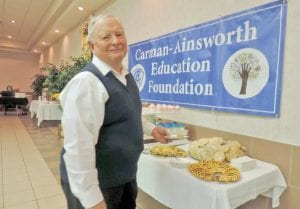 Honoree Dick Lee visited the dessert table before the program in his honor got underway.

FLINT TWP. — Richard (Dick) Lee, the guest of honor at the 2nd Annual Carman-Ainsworth Education Foundation (CAEF) Community Auction & Raffle last Friday, probably was not the only person to leave the event wearing a big smile.

One high-bidder left with four University of Michigan footballs tickets on the 50-yard-line for the Sept. 19 game in Ann Arbor, plus a U-M pennant and t-shirt. The package was valued at $325.

Another winner walked away with two tickets to the June 4 Detroit Tigers v. the Chicago White Sox game in Detroit. A cooler, cups , ball and pennant were included in the package valued at $162.

Another lucky winner stood a chance to increase his or her luck with a Lottery Bouquet of scratch-off lottery tickets.

Autographed sports memorabilia including a baseball signed by Tigers’ great Willie Horton; a round of golf; movie tickets; cooking lesson with a chef; a one-month family membership to the Genesys Family Health Club; day passes for six to Crossroads Village/ Huckleberry RR and much more was among about 150 items donated to the silent auction by local businesses and CAEF supporters.

CAEF is an independent non-profit organization formed to support C-A school initiatives. All proceeds from the event will benefit CAEF programs for students. Among projects in 2015, CAEF donated $6,000 for STEM Projects and awarded $8,250 in scholarships to students in DEEP, a dual-enrollment program in which students can earn college credits while still in high school.

In addition to the silent auction, funds also were raised via a Grand Prize card raffle valued at $750. The winner gets a night’s stay at the Holiday Inn-Gateway Center; a three-day car rental from Al Serra Auto Plaza (including Cadillacs) and dinner at CORK on Saginaw, a chic wine bar and eatery in downtown Flint. Still another fundraising feature was a Buy It Now board featuring several high-value gifts including tickets to any show at The Whiting.

Entertainment for the evening was provided by The Fairlanes & Deville’s Oldies Band.

In the program portion, Lee was recognized for more than 37 years of service to the C-A district. He is a retired teacher (1963-2000), coach, thespian director and former school board member (2001-2005). Lee also announced five different sports for 35 years at Carman-Ainsworth.

He is the author of “The Golden Greek, An Action Biography of Claude J. Marsh” which was available at the auction in exchange for a small donation.