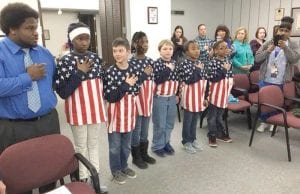 Six Dye Elementary fifth-grade students received special recognition from the Carman- Ainsworth School Board for their efforts as flag raisers.

The students can be counted on to raise and lower the American flag in all types of weather conditions, said Detra Fields, Dye principal.

“Faithfully, they take down the flag when raining,” she said. “Every day, including in cold temperatures, these students take great care in ensuring that the flag is raised at the start of the day.”

They have also learned to recite the Pledge of Allegiance in Spanish, which is the nation’s second most frequently spoken language. Each day, they say the pledge in both languages, Fields said.

“They are proud of themselves, their parents are proud, and the staff at Dye are proud of the extra effort that they have put into their responsibilities and for learning a new language.”

The student flag raisers recognized by the board of education are Nathan Carpenter, Ashley Frederique, Eric Norman- Davis, Te’Ajia Parrish, De’Andrea Smith and Matthew Wells. Each received a certificate acknowledging their accomplishment.