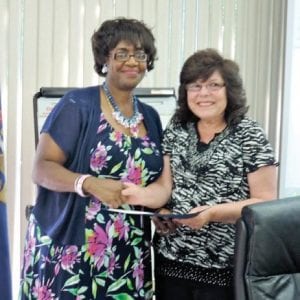 Sisters Cindy Hanson and Debra Duquette were honored by the school board for their exceptional service in the Randels Media Center.

Cindy Hanson and Debra Duquette, who happen to be sisters, were nominated for the award for their work at Randels Elementary in the media center.

Tunnicliff read from the nomination form that the two women have purchased books with their own money to give to students and paid fines for them so they did not have to miss a field day or be able to check out a book.

“They bring the Media Center to life with beautiful bulletin boards – all with personal resources,’’ multiple nominators said.

Tunnicliff added a few years ago, due to significant budget cuts, Hanson who was the media secretary at Dillon Elementary was asked to take on two buildings. Instead of complaining, she actually “adopted” hundreds more children.

As for Duquette, since retiring as a bus driver, she spends a lot of her time as a volunteer at the media center.

“You not only do your job but go well beyond,’’ Tunnicliff told the sisters.

Fewer than 10 people so far have been chosen to receive the district’s APPLE Award, Tunnicliff said. The in-house award was initiated in 2014.