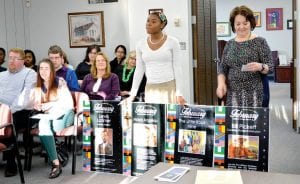 FLINT TWP. — President Barack Obama made an appearance near the main office of Carman-Ainsworth High School last month. Michael Jordan hung out in the athletic hallway, several famous scientists greeted students in the science hallway and other famous African-Americans were present throughout the school.

Those specials appearances were in the form of 52 colorful educational posters for Black History Month, created by Randi Richardson, a junior, with help from her mother Renee.

Randi received special recognition for her work and was one several CAHS student scholars and volunteers acknowledged by the C-A school board last week.

“She came to me early in the school year and said she would like to do a Black History Month project,” said CAHS Principal Deborah Davis, Randi had noticed that there were few Black History Month observances at the high school compared to activities she enjoyed as a grade- and middle-school student. 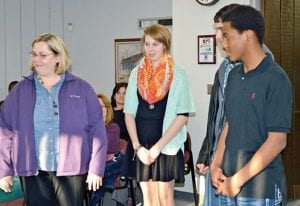 Randi hung the posters after hours on a Friday night for display during the entire month of February, Davis said.

They are high quality posters on foam board that include full color photographs and biographical information.

Superintendent Steve Tunnicliff said he saw one of the posters and commented to a staff member that it was nice they had purchased posters for display during Black History Month.

“I was quickly told that one of our students did them,’’ Tunnicliff said with a pleased chuckle.

Randi said the posters are reusable and will be saved for display next year at the middle school.

The board also recognized Tyler Pangerl, a senior, as an exceptional scholar who participates in many athletic and church activities, while maintaining a 4.0 G.P.A. He is an Eagle Scout and the recipient of a full tuition scholarship to the University of Michigan in Ann Arbor.

Chelsea Miller, a senior, was recognized as an exceptional scholar and volunteer who also participates in athletics, church activities, and other after-school activities including Student Council and the Chess Club. She also is the recipient of a full tuition scholarship to the University of Michigan in Ann Arbor.

The board also honored Mariel Hernandez, a senior, and the winner of the Priority Children’s Robert E. Weiss Outstanding Youth Award. She is active in many volunteer efforts, David said. She plans to attend the University of Michigan-Flint in the fall.

Hamza Jafari, the CAHS tenth grade winner, went on to place first in the tenth grade bee at the GISD level and ultimately finished fourth of 19,000 spellers in Genesee County in the 9-12 grade regional championship bee.

Jaylyn Nichols, 1st place, 9th grade spelling champ, while accepting congrautlations from Superintendent Tunnicliff, whispered to him that he would be back again next year.

All student honorees received a certificate of recognition from the school board.