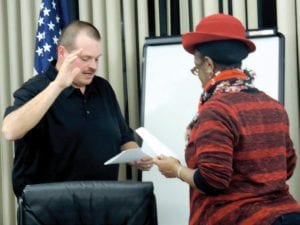 Lonney Jarnigin, a successful write-in candidate, takes the oath of office for a two-year term.

FLINT TWP. — The Carman- Ainsworth Board of Education swore in three members last week – two familiar faces and one new one.

Four board members re-elected in November will not be sworn into their new terms until the January 6 organization meeting. But two others were elected to fill partial two-year terms and were required to take the oath of office immediately. Those partial terms resulted from two seats vacated last year by resignations that were filled by appointees.

Patrice Hatcher, a two-term incumbent, ran for one of the two-year terms. A write-in candidate – Lonney Jarnigin, filled the second two-year term.

Hatcher assuming her new term left a vacancy in her current four-year term, which does not expire until December 31.

Board president Gloria Nealy appointed James Johnson to fill Hatcher’s vacancy for the rest of the year. Johnson was one of two board members appointed to fill vacancies created last year by resignations. By law, appointees must run for election on their own merits at the next general election.

Johnson chose to run for a six-year seat instead of his initial two-year seat. He will take the oath of office for his new seat in January.

The board has one more regular meeting scheduled this month.

Laura Garrison, who also was appointed to fill a vacancy last year, ran for a four-year term in the November election and will be sworn in next month. Until then, she is technically not a board member.

To facilitate these temporary changes, the board suspended a policy normally followed to fill vacancies. That usually involves posting a public notice within 30 days then conducting interviews, said Superintendent Steve Tunnicliff. Suspending the policy for three weeks was an expedient solution to ensure board consistency for the rest of the year, he said.

The board will restore its regular policy in 2015 when the full board is seated, he said.

Incumbents Joy Crane and Gloria Nealy will also be sworn in with Johnson and Garrison at the January meeting.

Longtime board member Peggy Anderson will retire at the end of the month.

Jarnigin, the new board member, was born and raised in the C-A school district, according to a brief biography he provided.

“I graduated from Carman-Ainsworth in 1987, first year of the Cavaliers,’’ he said. His wife Renee has worked for the district for ten years and he has one child attending the high school and another who is a senior in college.

“I am honored to be a part of the Carman-Ainsworth School Board and look forward to serving with the many fine members and administrators,’’ Jarnigin said.