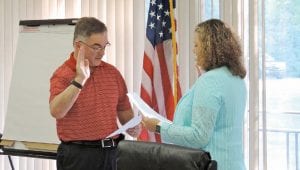 C-A Board President Patrice Hatcher issued the oath of office to Gary Cousins who was appointed last week to a vacancy on the school board.

FLINT TWP.— Gary L. Cousins was prepared to serve long before an opportunity recently opened up for him to join the Carman-Ainsworth Board of Education.

Cousins was appointed to an opening on the school board last week, topping six other applicants for the seat vacated last month when Laura Garrison resigned to pursue career opportunities.

“I was already planning on running for one of the three openings in the November election,” Cousins said in his application letter to Superintendent Eddie Kindle. “This current vacancy and potential appointment would allow me to begin serving the district earlier.”

A resident of the district for 24 years, Cousins noted that his daughter is a C-A graduate and that he has long been active in many capacities including currently serving as a classroom volunteer in Angie Cameron’s developmental kindergarten class at Dillon Elementary School. In other volunteer roles dating back to 1999, he served as a band booster for C-A Middle School and High School and as a member of the Parent Club at Dillon Elementary and the former Carman Park Elementary School.

According to his resume, Cousins is an adjunct instructor of statistics, economics and algebra at Spring Arbor University, where he wrote an Online Statistics Curriculum for the university. He also works as an industrial engineer for General Motors Customer Care and Aftersales where his work has included redesigning warehouses in Philadelphia, and in Bochum, Germany. He also was the launch engineer for the Davison Road Processing Center. He is a board member for the Flint Central Church of the Nazarene where he is Chairman of Sunday School and Discipleship Ministries and was ordained as an Elder in 2011.

Election rules stipulate that Cousins must run to retain his seat in the November election.

Other applicants interviewed for the board vacancy were Faye Armstrong, Robbin Auston, Jennifer Malone, Stephanie Hackney and William Newsome, according to board records.

Board President Patrice Hatcher said the board had a tough time choosing from “seven great candidates” but that Cousins stood out as the consensus choice.