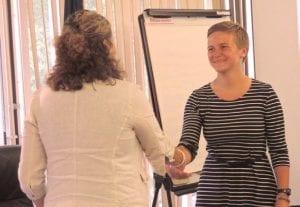 Isabelle Hynan, a C-A senior, takes the oath of office to serve a one-year term on the board of education.

FLINT TWP. — The Carman- Ainsworth Schools board of education has appointed Isabelle Hynan, a senior, to serve a one-year term as a student school board representative. She is replacing Alexis Ritchie, who resigned after one year of service.

The school board appoints two students to serve as non-voting members. Each student is usually appointed as a junior and serves two years.

Hynan took the oath of office last week, joining Karla Bell, the junior board representative, who was sworn in last month.

Hynan was selected from a field of applicants by the principal and her administrative team. Interested students submit a letter of interest/resume, said CAHS principal Debbie Davis.

In her letter of interest, Hynan said she was interested in joining the school board because she welcomes student leadership opportunities.

“I have been the drum major of our marching band for the past two years and will be the head drum major again this year,” Hynan said. “This has given me an opportunity to lead my peers and help them to understand the importance of bettering themselves as well as the organization they are a part of.”

Hynan was also chosen as the captain of the varsity lacrosse team that merged with Davison High School this year. In addition to sports, she has a strong academic record of a 3.99 GPA with accelerated and AP classes.

She is a member of the band council which plans awards, band camp, and general improvement ideas.

Also, she was accepted to the Naval Academy Summer Seminar this summer where she learned more team-building and leadership skills.

Hynan has served as vice President of Student Council for three years and will be a member again in the coming school year. She also is an active member of the National Honor Society.