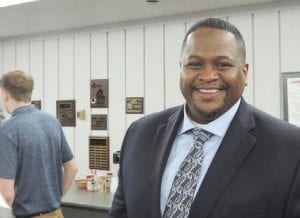 Assistant C-A Superintendent Eddie Kindle is all smiles after being hired last week as the district’s new superintendent of schools.

FLINT TWP. — The Carman- Ainsworth Board of Education moved quickly to replace Superintendent Steve Tunnicliff, who submitted his letter of resignation on March 22.

On March 31, after a series of committee meetings and public interviews, the board unanimously decided to hire Eddie Kindle as the new superintendent. Kindle, who joined the district two years ago, is currently the assistant superintendent of curriculum and human resources.

At an open meeting on March 24, the school board’s Succession Planning Committee discussed ways to fill the superintendent position then unanimously recommended that Kindle be interviewed for the job. At a March 29 meeting. the board Committee of the Whole unanimously supported the recommendation to invite Kindle for a public interview at a special meeting on March 31.

Noting that as the district’s hearing officer, he handles all student discipline matters, he said he tries to assure parents that the district cares about their child.

“I want parents leaving those situations knowing that your kid made a mistake but it is not the end of the world,’’ he said. Kindle also presented a three-minute slideshow of photos he has taken of various C-A activities since he came to the district. He said he is working on moving those photos from his cellphone to a monthly online presentation called Take 5 to showcase district highlights. Board president Patrice Hatcher said she liked that hiring Kindle will mean a seamless transition for C-A’s top management.

“He already has the trust of the community she said,” noting that she has watched Kindle interact with parents and students with care and compassion during difficult grievance hearings. That is a harder job than working with high achieving students, she said.

She also said she was impressed by Kindle’s accountability focus, same as she was two years ago when he was hired as an assistant superintendent.

Laura Garrison, board secretary, said she liked that Kindle comes from a varied background that included being a teacher and administrator which gives him knowledge about all positions in the district.

Kindle came to C-A from the Port Huron Area School District; where he had served for four years as the assistant superintendent of administration, labor relations and operations. During his 21-year tenure with the district, he served in various roles including business and physical education teacher at Port Huron High School from 1994- 2007; high school assistant principal from 2007-2008; middle school principal from 2008-2010 and assistant superintendent from 2010 to 2014.

Other C-A board members praised Kindle’s plans for improving parent and community engagement and for his students first focus.

When recommending Kindle for assistant superintendent two years ago, Superintendent Tunnicliff noted that he was selected from more than 150 candidates who applied for the job. Of those, only 45 had administrative experience at the building or central office level and some at the superintendent level, he said. Kindle’s resume includes certification as a Specialist in Educational Leadership from Wayne State University; a Michigan Leadership Institute Superintendent Academy Certificate in 2012; Master’s in Educational Leadership from Wayne State in 2005, Bachelor’s degree in Business Education from Ferris State University in 1992; State of Michigan Professional Education Certificate in Business and Physical Education and State of Michigan School Administrator Certificate.

Kindle will assume his new position as Superintendent of C-A schools on June 4. Tunnicliff’s resignation is effective June 3. He is leaving to become associate superintendent for the Genesee Intermediate School District, beginning June 6.